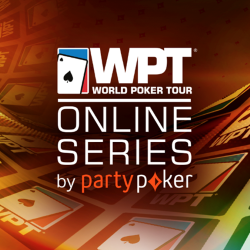 The World Poker Tour had planned for years to expand its offerings online. And when the coronavirus pandemic forced the WPT to postpone or cancel one tournament after another in its Season XVIII – both on the main tour and WPTDeepStacks – the company accelerated its online plans. The WPT announced the first-ever WPT Online Series by PartyPoker.

Action was supposed to start on May 10, but everyone was anxious to get it going, so they moved it up to May 3-19. But the 10 WPT-branded events were a part of a much larger PartyPoker series that ran through the end of May.

Now that it is done and dusted, it’s time to look at the final numbers.

The entire WPT Online Series by PartyPoker boasted of 94 events over the course of 29 days in May. And it delivered these final tallies:

The series also set records for the most entries in several categories of tournaments:

–Most entries in a WPTDeepStacks event: 3,554

Our Online Series is officially over and we are overjoyed with what a huge success it has been.
⠀
29 days
94 events
94 trophies
111,170 entries
And $52,877,550 in prizepools.
👏🏼 👏🏼 👏🏼
⠀#TheCupAwaits 🏆
⠀@partypoker@partypokerlive@wptdeepstacks@alexogray pic.twitter.com/x2UcRghC9u

In the end, Viktor Ustimov of Russia claimed that title after 15 cashes, three final tables, two victories, and a second-place finish in the WPT Online Championship Main Event.

For those accomplishments, Ustimov won a PartyPoker LIVE Passport worth $11,000. This can be used for any PartyPoker MILLIONS tournament around the world or PartyPoker LIVE Online events over the course of the next 24 months.

The winner walks away with a partypoker LIVE passport ($11,000).

The first place goes to Viktor Ustimov 🇷🇺 with 650 points, 2 wins, runner-up of the WPT Online Championship and over $1,000,000 won during the Series.

For full ranking head to https://t.co/0Ad4aiI7IC

Ustimov won with 650 points overall, but those just behind him on the leaderboard also won prizes.

Amongst the 94 tournaments, ten WPT-branded events took on special significance. Not only did they all exceed their prize pool guarantees, they created new WPT tournament winners. We’d like to list all 10 of them here, along with the prize pools for those events, but there is no official list of winners.

So, we’ll just list the numbers for the three most high-profile events of the series:

Next Up: Summer Series

As players wind down from a whirlwind of online poker tournament action in May, they will have some time to prepare for the upcoming WPT World Online Championships.

Play will begin on July 1 and run through August 9. While the entire series is likely to exceed 100 events in total, there will be 15 WPT-branded championship tournaments. And the highlight of them all will be a $10,300 buy-in Main Event. The freezeout event will offer starting flights on August 1 and August 2, with the playdown to the final table on August 3-4. The final table will play on August 8.

PartyPoker will host the action, of course.

More details about the entire series will be released soon.

Big news today for WPT and @partypoker! The WPT World Online Championships are coming this July and August 🏆