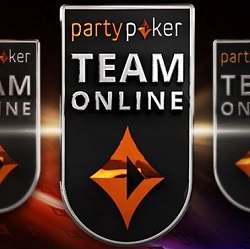 It appears that PartyPoker is prepared to boost its online presence in big ways. And one of those ways is to create a group of online poker players to represent the site on social media and streaming channels like Twitch.

Earlier in February, PartyPoker emerged as the official online poker sponsor of Thirst Lounge, a Twitch stream run by poker pro and hedge fund manager Bill Perkins. Streaming is typically done from Perkins’ yacht or luxurious destinations in the area of the Bahamas and features a number of poker players.

As it turns out, that was just the beginning of PartyPoker’s extensive foray into Twitch.

Last week, PartyPoker announced the creation of Team Online, a group of “some of the world’s most high-profile online poker content creators and streamers.”

The site has been working to attract new players, from recreational players who might be attracted to three-handed hyper-turbo SNGs called Spins to pros who can benefit greatly from reaching the Diamond Club Elite status of PartyPoker’s VIP rewards program. Then came the Thirst Lounge announcement, followed by Team Online – all in the month of February. It is certainly a focused and concerted effort.

Canadian online poker pro Matt Staples was the first member to be inducted into Team Online. If his last name sounds familiar, it is because his brother, Jaime Staples, has been playing poker for several years as a member of PokerStars’ Team Online. And Jaime just ended his business relationship with PokerStars on February 5.

Matt, the younger of the two Alberta natives, is only 22 years old but has built a significant following on Twitch playing mid- to high-stakes online poker tournaments on Twitch. His channel has grown to be viewed more than three million times and boasts of more than 54,000 followers.

Jaime had been the more high-profile pro until the brothers entered a weight-loss bet together in 2017, which put both poker enthusiasts in the spotlight. Jaime lost a great deal of weight while Matt gained, and the two weighed in at the same weight in March 2018, garnering them $150,000 from Perkins.

We did it. We won the ultimatesweat bet and 150k. I feel so surreal right now.

Thanks to @matthew_stapless @bp22 @mikevacanti friends and family, @beccarr94 and of course all of you rooting us on every day. Inspiring me to be better. Thank you ❤️ pic.twitter.com/Yg6IpfLv5y

Matt has since made a name for himself on Twitch, and PartyPoker noticed. His profile and following prompted PartyPoker to sign him to the newly-formed Team Online last week.

Very excited to announce that I have officially joined @partypoker Team Online. The future looks very bright and i'm more motivated than ever to deliver solid content on twitch and to work with this team to do some great things. https://t.co/IgoRmlW4fp pic.twitter.com/KQeTiNfHCb

The Australian online poker pro spent years honing his game, starting with the lowest stakes cash games available and moving up over time, eventually focusing on tournaments. And recently, his passion for poker was reignited by the ability to stream on Twitch. At the age of 26, he now lives in New Zealand due to new laws in Australia that banned online poker in 2017.

Pavlovic’s Twitch channel was nearing 40,000 subscribers when he was announced as the second member of PartyPoker’s Team Online, though he has now surpassed that mark. His library consists of 126 videos, some of which are marathon grinds.

Proud to announce my signing with @PartyPoker Team Online. After grinding Twitch Poker for over three years, this is a special day for me. I can't wait to showcase what PartyPoker have to offer. The content is just getting started. https://t.co/BwgEcLplN8 pic.twitter.com/bGGc7Trbdc

Travis “dramaticdegen” Darroch is In

Another young player, Travis Darroch, first took up poker during his late teens when he first watched Rounders. However, the Canadian’s first foray into professional poker resulted in going broke, so he spent time focusing on his longtime passion of acting.

But when Twitch showed him how to combine his desire to be on camera and his love of poker, Darroch began streaming. Though he has fewer than 100 videos in his library thus far, he has amassed more than 23,000 followers on Twitch and more than one million views.

We did it Fam! Moving on to the next big step in streaming! @partypoker Team Online, baby! It's going to be a great year ? pic.twitter.com/semneijQgR

A Canadian by birth, Patrick Tardif was a fan of gaming for many of his 25 years, though he specialized in accounting in school. He spent his late teens and early 20s playing Halo competitively but then took a break to teach English at a school in South Korea. Upon his return to Canada, he picked up online poker.

From the micro-stakes level of poker online, he has moved up quite rapidly over the course of two years. Tardif now plays high-stakes online for more than 12,000 followers. He has produced more than 50 videos thus far and looks forward to representing PartyPoker.

Happy and proud to announce I've joined @partypoker as a member of team online. It's been one of the things I've been working for these past few years and am looking forward to what the future holds. pic.twitter.com/AaKgD7cNnA

The first of the team members from Venezuela, Alan Widmann joined PartyPoker fresh off of a Unibet Poker ambassador stint. He lives in Germany and spends quite a lot of time streaming World of Warcraft, which he played professionally for a time. He also plays other games in the esports arena.

Widmann is the most prolific of the team thus far, having accumulated more than 286K followers and produced nearly 200 videos. As a part of the new PartyPoker team, he plans to showcase more of his online poker play, most of which he has learned through self-study and friendships with players like Viktor “Isildur1” Blom. He also has some live poker experience and nearly $50K in live earnings thus far.

I am incredibly happy to announce that I have officially joined the @partypoker Team Online.
This is an amazing opportunity to take my Poker skills to the next level and be on the same team
with talented content creators and world class players!https://t.co/WJnUtVTdYF pic.twitter.com/0LnIY9KvSC

Just today, PartyPoker added yet another – the sixth – member of its online poker team. Ryan Schoonbaert is another Canadian now in his late 20s, and he has been playing poker for years, though he started with live low-limit games and moved up in stakes and into mixed games. And as he broadcasts on Twitch, he hopes to keep moving up and translating his live skills to online Hold’em and Omaha games, he brings the streaming community with him on his journey.

Schoonbaert is just nearing 8,000 followers and 40 videos, but those numbers will likely increase quickly as he streams for PartyPoker.

So excited to be joining partypoker Team Online!
Started streaming just over a year ago, and this is such a huge milestone for my poker career.
Very excited for the future! https://t.co/RqijgQkYie