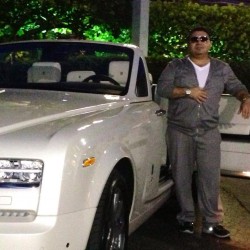 Khalilian believes billions to be made from online poker

The long and sometimes confusing story of the PokerTribe online poker site took a new turn last week when the Iowa Tribe of Oklahoma welcomed headphones company Monster into the mix. While Monster is not new to poker, having been a primary sponsor of the World Poker Tour for years, its methods of entering the online poker sector have raised a few eyebrows.

The short story is that the Iowa Tribe of Oklahoma has been trying to launch its PokerTribe online poker site for several years for international customers. The tribe partnered with Universal Entertainment Group (UEG) for the software, though the Cheyenne & Arapaho tribes have sued UEG and owner Fred Khalilian for fraud over the same software. The Iowa Tribe finally received an online gaming license from the Isle of Man last month, based on several conditions that were not revealed to the public. Last week, Monster announced that Khalilian was its new chief operating officer and that Monster purchased the online poker venture from the Iowa Tribe.

Allow a bit of a longer explanation…

Summary of Developments Prior to September 2017

The Iowa Tribe of Oklahoma first announced its online poker intentions in 2015, with PokerTribe-dot-com aimed at international players, those in regulated US states, and airline and cruise ship passengers. The tribe had to take its case to court due to the Oklahoma Gambling Compliance Unit saying the site was illegal. With a favorable ruling in the US District Court, the tribe moved forward with the development of the software from Universal Entertainment Group.

The next announcement was that PokerTribe would be launching on August 1, 2016. That never happened.

Then came September 2017, when the endeavor put itself into the news again with a press release stating that the Isle of Man Gambling Supervision Commission awarded the Iowa Tribe a gaming licensed based on its completion of several tasks, though the details were not revealed. The tribe simply said that a deal was in the works regarding the software, a transfer of the online gaming assets to an “internationally-known brand,” and the hiring of a general manager.

Meanwhile, however, the Cheyenne and Arapaho tribes filed a lawsuit in the Concho tribal court against UEG, owner Fred Khalilian, and his business partners. The suit alleged them of defrauding the tribes for the PokerTribes online poker site, for which they put out $13 million in total. Further, the claims include fraud by Khalilian, as he allegedly had no right to sell the software to them from the start.

Big Changes as of Mid-October

An article on the Digital Trends website broke the news that Khalilian was the new COO of Monster, the company that produces some of the world’s most popular headphones and is a primary sponsor of the World Poker Tour. And together, Monster and Khalilian were set to launch PokerTribe on or before December 15, 2017.

the first paragraph of this column is so nonsensical it will make you want to go back to bed https://t.co/qRYKCZJm72

Monster CEO Noel Lee explained that the company was in need of cash after deals with Amazon and Beats by Dre fell apart. And Khalilian promised big things with the online poker site due to loopholes in Indian gaming regulations. He wants to become a global entity and plans to pursue online gaming licenses from Malta, England, and Germany, in addition to the Isle of Man license in process.

The Digital Trends article noted that the license has not yet appeared on the Isle of Man’s website because, according to the regulator, the applicant must pay the related license fee, which is due within 90 days of final approval.

In addition to bringing Khalilian to Monster, News OK reported that Monster Products Worldwide’s affiliate, Monster Technology Group, bought the entire online poker venture with assets for an undisclosed sum to go with the new COO. Iowa Tribe Chairman Bobby Walkup claimed that the “collaboration” will help them bring “legitimate online gaming to players and enthusiasts worldwide.” While the Iowa Tribe will continue to hold the gaming license, Monster will hold the gaming vendor license.

Khalilian brings a pending lawsuit and a checkered past to Monster, but Lee calls Khalilian an “acquired taste” but a “genius.” Media reports have long asserted Khalilian has been in charge of numerous business-related scams and alleged to have been abuser in relationships, even a rapist.

But Khalilian responded, “The same article’s been written 30,000 times, everybody wants to write about me.” He went on to assert – even swear to God – that he did nothing wrong. “It’s just when anybody Googles me, they really think I’m this bad guy. It’s not fair.”

The more I read about Fred Khalilian, the guy bringing online gambling back to the U.S., I can't decide if he's a genius or a con man. What do you think? https://t.co/UbHh8Wd4Fu @DigitalTrends

And about the new partnership and online poker project with Monster, Khalilian was more than confident about its future. “I’m going to be the first in the world,” he said. “And I’m going to be a multi, multi billionaire, without arrogance. I probably could be as big as Uber, if not bigger.”

For now, the online poker community awaits the launch of the PokerTribe site before the end of 2017, though other deadlines have come and gone just as easily as this one could. The poker world at large is mostly skeptical about the chances for this project and about Khalilian himself, so it will be interesting to see what happens going forward.