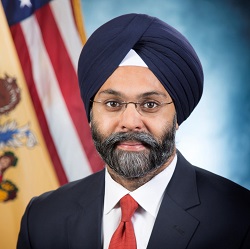 The fallout from the recent new Wire Act memorandum continues into the court system. The latest lawsuit was filed this week by New Jersey Attorney General Gurbir S. Grewal, and it pertains to the Department of Justice’s lack of response to the state’s demand for documents.

It all started in November 2018 when the DOJ’s Office of Legal Counsel wrote a new memorandum to interpret the US Wire Act. The new opinion about the law reversed a 2011 opinion that relegated the Wire Act solely to sports betting applications, leaving states the option to legalize and regulate online lotteries and other forms of online gaming, such as online poker and casino games.

The memo was made public in January 2019, at which point the numerous states with concerns about the new interpretation wrote to the DOJ requesting clarifications and further information. The lack of clarity in the new opinion as to how it would pertain to states’ current online lotteries and gaming was the biggest concern, which resulted in a lawsuit that continues in the US District Court today. A decision is expected in May, but the judge already noted that the case could easily go to the US Supreme Court.

New Jersey and Pennsylvania had the same concern but also a specific question for the DOJ. How much did casino magnate and anti-online gambling activist affect the DOJ’s decision?

Adelson All Over DOJ Decision

For years, Adelson had spent millions upon millions of dollars to support political candidates that would try to pass a bill called the Restoration of America’s Wire Act (RAWA). The new law would do more than overturn the 2011 Wire Act decision; it would officially ban all online gambling in America.

Those politicians had little success through the years, though. They proposed bills that garnered no support, and they even tried to insert RAWA-informed language into budgets. All efforts failed.

Adelson contributed to the election of Donald Trump in 2016 and then began to reach out to those appointed to the DOJ by the Trump Administration.

It quickly became clear that Adelson had influenced the DOJ’s decision to revisit and issue a new opinion about the Wire Act, and subsequent reporting from the Wall Street Journal confirmed that Adelson worked his sources and directly influenced the decision.

Both states had a keen interest in the Wire Act because of their involvement in internet gaming. New Jersey had implemented it more than five years prior and seen the industry garner more than $1 billion in revenue since then, as well as to help its land-based casinos in Atlantic City get through some rough financial times. Pennsylvania legalized internet gaming in 2017 and planned to launch sites in 2019 to follow in New Jersey’s footsteps.

The Attorneys General objected to the DOJ memo and requested information about lobbying groups and individuals that may have influenced it.

Grewal took further actions. He requested copies of all records pertaining to the Wire Act between 2011 and 2018, including memoranda, communications, consultations, and meetings pertaining in any way to online gaming or gambling. He wanted it from a list of DOJ offices, as well as any connections to Adelson himself or those associated with his lobbying group.

“In a related move, Attorney General Grewal has filed a Freedom of Information Request (FOIA) on behalf of New Jersey seeking records pertaining to the new DOJ opinion.” https://t.co/7DfKh7oZ9j

Moreover, Grewal requested expedited processing. He cited a “compelling need” to protect due process rights and act within the time frame of implementation established by Deputy Attorney General Rod Rosenstein, as well as an “urgency to inform the public.”

By May 7, the DOJ had not provided any of the documents named in Grewal’s letter. That was the 90-day window that Grewal specified in his request.

Grewal filed a lawsuit against the DOJ on the basis of its violation of the Freedom of Information Act (FOIA), as the government agency failed to provide any of the documents requested.

About the lawsuit, Grewal said, “Online gaming is an important part of New Jersey’s economy, and the residents of New Jersey deserve to know why the Justice Department is threatening to come after an industry we legalized years ago. It’s especially important that we figure out whether this federal crackdown is the result of a lobbying campaign by a single individual seeking to protect his personal business interests.”

The DOJ did confirm in March that it received New Jersey’s FOIA request and that it would be processed in an expedited fashion, despite the “unusual circumstances.” However, another month later, no records had been provided.

Grewal’s lawsuit was filed in the US District Court demanding that an expedited FOIA request be fulfilled within 20 days, as is the option per the DOJ’s FOIA guide. New Jersey also noted that the DOJ hadn’t explained why the request was characterized as “unusual circumstances.”

4 months ago, @TheJusticeDept reversed its longstanding opinion on the legality of online gambling.

3 months ago, we filed a FOIA request demanding to know why and received no response.