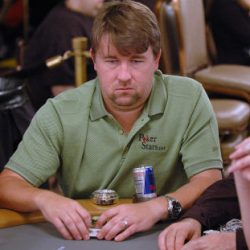 It had to happen someday. Chris Moneymaker wasn’t going to be a PokerStars ambassador forever. Nonetheless, it was startling news.

On December 31, Chris Moneymaker posted a video on his Twitter page announcing that he decided to leave PokerStars, effective immediately. This ended a 17-plus-year partnership, one that started after he took an online poker satellite win to the World Series of Poker and turned that opportunity into $2.5 million and a WSOP Main Event title.

Every component of Moneymaker’s story, starting from his start on PokerStars, created a perfect storm that was the poker boom. And that boom was so directly tied to him that people often referred to it as the Moneymaker Effect.

That connection between Moneymaker and PokerStars remained intact through the years, survived Black Friday in the United States and the ensuing years when PokerStars couldn’t even operate in the US.

Like so much else, however, 2020 broke that relationship. It doesn’t seem to be a contentious split, but it is a breakup. More than that, it is truly the end of an era in poker.

A Satellite That Became an Era

Chris Moneymaker was the quintessential poker fan. He began playing Texas Hold’em after seeing Rounders and played some poker for fun on PokerStars. He worked a 9-to-5 job as an accountant in Tennessee and logged on to Stars for a little poker when time permitted.

Little did he know that when he played an $86 satellite for a seat to the WSOP Main Event, he was in the process of creating a poker popularity explosion.

Moneymaker turned that online poker satellite into a qualifier online, which he played and won. The prize was a seat into the 2003 World Series of Poker Main Event, one that normally cost $10,000 to enter. He wasn’t even sure if he wanted to play the live tournament in Las Vegas. But he did and outlasted 838 other players, the last one being the legendary Sam Farha. That heads-up match went down in the history books when an accountant from Tennessee defeated Farha and won $2.5 million.

PokerStars pounced on that story and brought Moneymaker on as an ambassador. It was, perhaps, the smartest business move in the company’s history.

A Pastime That Became a Career

Suddenly, the biggest moment in the poker world to that point catapulted Moneymaker into the spotlight. There were interviews and fans. There were obligations as an ambassador to welcome new players into a game he had only recently played for fun.

Moneymaker was on the road, traveling to play more poker than he had in his life. It came with autographs and handshakes that turned to selfies and social media pressures.

Meanwhile, Moneymaker rode the wave. He finished second in the 2004 WPT Bay 101 Shooting Star Championship for $200K. He just missed a PLO final table at the 2004 WSOP. He played events like Poker Royale, Poker After Dark, and the Poker Superstars Invitational. Soon after, he was on the road and traveling the world, cashing in events like the European Poker Tour London and winning tournaments from the Asia Pacific Poker Tour Sydney to the Gold Strike World Poker Open in Tunica, Mississippi. He finished 11th in the 2011 PokerStars Caribbean Adventure Main Event for $130K and second in the 2011 NBC National Heads-Up Championship for $300K.

Endless Opportunities That Came to a Screeching Halt

On April 11, 2011, US law enforcement agencies seized PokerStars’ domain and those of four other major online poker sites that had been operating in the United States. They issued indictments for 11 executives from those companies, including PokerStars founder Isai Scheinberg.

Moneymaker continued his role with Team PokerStars but had to travel away from American shores more often. In the years that followed, he and Stars managed to maintain their relationship despite the ongoing uncertainty and eventual reality of the tiny US online poker market.

His travels continued through 2019. Moneymaker and his family continued residing in Tennessee throughout it all, but the PokerStars ambassador had to travel often to Las Vegas. He jetted across the US to play in events from Florida to Texas, from California to New Jersey. He also continued his international travel that included London and Dublin to Sochi in 2019 alone.

Also in 2019, Moneymaker became a member of the Poker Hall of Fame.

After overcoming many of the Black Friday challenges to remain with PokerStars, that train also came to a screeching halt in 2020. The coronavirus pandemic not only prohibited live poker in the US, traveling and playing in almost every corner of the world stopped as well.

Breaking Up is Hard to Do

It was clearly a difficult decision. Moneymaker had a lot of time to think about his future during the 2020 pandemic-related shutdowns and restrictions. After spending so much of the year with his family, he decided to start the year on a new note.

“I will be leaving PokerStars, effective immediately.”

2020 has been a year. Sad news. Thanks for everything ⁦@PokerStars⁩ pic.twitter.com/tT1rZ12QGr

His immediate plans to spend more time at home and play less poker puts the focus directly on his family, though he doesn’t rule out poker entirely.

Moneymaker expressed gratitude to PokerStars for the 17-year relationship, calling it a “phenomenal experience with a great company.” He seems open to whatever other endeavors may pique his curiosity.

He ended the video, humbly and gracious as always: “Thanks for everything.”

After 17 years as a PokerStars Ambassador, today we say farewell to @CMONEYMAKER.
Thank you for everything you’ve done for PokerStars, the game of poker & the industry. Without you, who knows where we would all be today, we can’t thank you enough.
Farewell, but not goodbye. 🤝 pic.twitter.com/1EW9FOTWrJ

The End of an Era

Poker will continue on its trajectory whether Chris Moneymaker is partnered with PokerStars or not. The breakup is far more symbolic than anything else, at least for the general poker public and industry.

The game hasn’t been the same for many poker players in the past decade. Black Friday removed the largest poker rooms from the US market, and numerous other countries suffered a similar fate. Some of them now have smaller, ring-fenced online poker markets, some like Australia have no state-regulated sites at all.

Alongside legal changes, many companies shifted their focus to the games that deliver more revenue, like online casino slots and sports betting. PokerStars is one of many that refocused their efforts in the past decade.

Moneymaker’s departure from Team PokerStars changes nothing about that scenario. It merely symbolizes the extreme difference in almost every aspect of the game from the boom until today. It goes to show the importance of Moneymaker to the game in the early 2000s and the weight he carried on his shoulders for the past 17 years.

So, to you Mr. Moneymaker, we say, “Thanks for everything.”