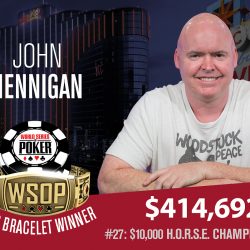 The Rio was buzzing with final table action on Friday as three bracelets were awarded. John Hennigan took down his fifth career bracelet after defeating David “Bakes” Baker heads-up in the $10k HORSE Championship.

Meanwhile, Hanh Tran overcame a monster chip deficit to win the $1,500 2-7 Triple Draw Event. Finally, Australian Michael Addamo crossed the finish line as the winner of The MARATHON for his first bracelet victory and largest cash of his poker career.

John Hennigan is one of the most storied poker pros in history and always a threat to take down any tournament he enters, especially mixed game tournaments. Heading into the final table of the $10k HORSE Championship on Thursday, he had four WSOP bracelets.

Hennigan navigated his way through a strong final table that included Randy Ohel to make heads-up play against David “Bakes” Baker but the pair were unable to finish up. They returned to the Rio on Friday with Hennigan holding a 4 to 1 chip lead.

Baker didn’t give up during his heads-up battle against Hennigan, but he was unable to make a sustained run. A bad run during Stud 8 or Better left him super short and soon he was left with less than half a big bet during Limit Hold’em. He put the last of his chips in with Ad-6s but Hennigan flopped a pair of threes with his Jc-3h and those threes were good enough to give him the win.

“Johnny World” Hennigan earned his fifth career WSOP bracelet in this event and $414,692. There are some that think he is overdue for induction into the Poker Hall of Fame and after this performance, he may get enough fan votes to make the list of finalists later this year.

Hasting was perhaps the most well-known player at this final table but he fell short of the bracelet, finishing in fifth. In his final hand, he was only able to pull a 10-8 and it was nowhere close to beating the 7-6-5-4-2 of David Prociak.

With four players left, Oscar Johansson went on a run that saw him go from the short stack to chip leader. He lost the lead for a time but regained it for good three-handed. He knocked out David Prociak in third place to and entered heads-up play against Hanh Tran with a 7 to 1 chip lead.

Tran was not ready to roll over and started to close the gap. Eventually, he overtook Johansson for the chip lead and it was clear that he held the momentum. Soon, Tran held his own 7 to 1 chip lead heading into the final hand.

The last of Johansson’s chips went into the pot after the second draw and both players stood pat. Johansson showed 9-8-5-4-3 but Tran showed 9-6-5-3-2 to take the hand and the title.

Hanh Tran has been coming to the World Series of Poker for eight years but has primarily played in cash games. His only other career WSOP cash came in this event in 2014. This time around, he earned his first career WSOP bracelet and $117,282. That ought to get him quite a few buy-ins in the 2-7 cash games at the Rio.

What do you get when you bring together 1,637 players for an event with 100-minute levels? You get Event #24, the $2,620 MARATHON NL. On Friday, the final nine players of this event came back to the Rio after four long grueling days of play looking to take down the bracelet and $653,581.

Cate Hall’s day came to an early end with an eighth-place finish. She admitted afterward that she was not mentally invested at all in this event and basically “luckboxed” her way to a $65k payday. Martin Jacobson started the day second in chips but only mustered a fifth-place finish.

Taylor Paur also fell short of his second bracelet, finishing in fourth place. With Bart Lybaert’s elimination in third, that left Mark Sleet and Michael Addamo to play it out for the bracelet.

Sleet had a 10 million chip lead over Addamo at the start of heads-up play but Addamo managed to come back to take the chip lead. Sleet tried to make a comeback but failed to gain momentum.

Finally, Sleet looked down to pocket sevens and shoved for his last 11 million. Addamo called with Ac-Kh and proceeded to flop a king. That would prove enough to give him his first career bracelet.

This was Addamo’s second career WSOP final table. His last came in 2016 when he finished third ina $1,500 NL Event. This time, he was able to take it down for his first career bracelet and the $653,581 top prize, the largest score of his live tournament career.