By Jennifer Newell
May 11th, 2020 | Last updated on May 11th, 2020
Home » Poker News » WPT and PartyPoker Partner for Summer Championships 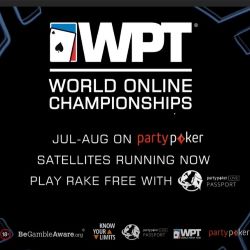 The World Poker Tour’s first foray into the world of real-money online poker has been successful thus far. The inaugural WPT Online Series on PartyPoker kicked off this month with 10 WPT-branded tournaments amidst a series of even larger proportions.

With early success and a lot of confidence, the World Poker Tour and PartyPoker announced they are teaming up again for the WPT World Online Championships from July 1 through August 9.

This first cluster of online poker tournaments for the WPT on PartyPoker began last weekend and led to an exciting few days. Many of the tournaments only started their initial flights, but a few events ran to completion already. Those results were:

The biggest #WPTOnline winner yet is Charlie Carrel 🇬🇧 in the $25,500 Super High Roller event on @partypoker!

Carrel wins $600,250 and is now near the top of the WPT Online leaderboard.

Actually, there are many more, but we’ll summarize the biggest events at a later date.

PartyPoker and the WPT received player feedback regarding the overlap of the WPT Online Main Event and WPTDeepStacks. The Main Event was scheduled to play its Day 2 on May 18 and final day on May 19, and those are the two days set for the WPTDeepStacks.

With that in mind, the executives made some changes. The WPTDeepStacks will keep a starting flight on May 18 but then move the conclusion of the tournament to May 27.

Last week, the World Poker Tour announced the next big series to be held online via PartyPoker. It will be the WPT World Online Championships, featuring 15 championship tournaments and an entire series set for July 1 through August 9, 2020.

The main event of the series will be the $10,300 buy-in WPT World Online Championship, which will officially close out Season XVIII of the World Poker Tour. Many players will recall that the WPT often closed out its season with a World Championship event, but that has been missing in the last several years. The last one was the closer for Season XIII at Borgata in Atlantic City.

PartyPoker LIVE President John Duthie noted, “Players have asked us to do something special, and the WPT World Online Championships is the perfect way to meet the demand of the summer poker season.”

Action will kick off on July 1, but the aforementioned highlight of the series will happen at the beginning of August. That schedule is set:

There will also be a Mini World Championship running alongside the larger buy-in. The Mini will offer a $1,100 buy-in, though it will also be a freezeout and mimic the exact schedule of the other.

There may be guarantees placed on these events, but we must wait to see if that happens. And the full schedule is not yet available. This was the overall announcement with must more information to come in the following weeks.

July-Aug 2020; The Biggest Ever Online Series on ⁦@partypoker will be called ⁦@WPT⁩ World Online Championships, this was mine & Devilfish’s favourite event of year held at Bellagio, LV.