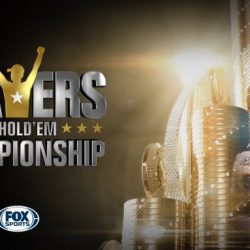 PokerStars is no stranger to being on American television. During the poker boom, there was the PokerStars Million Dollar Challenge and the PokerStars Big Game. But this is a new era for the leading online poker site in the world. It ever-so-cautiously reentered the US market several years ago with a little poker site in New Jersey. In late 2019, PokerStars opened its Pennsylvania site.

Last month, though, PokerStars launched in Michigan and is starting to see more of the potential of the burgeoning regulated US market.

Since PokerStars and FOX Bet are already partnered for online gaming, the two worked together earlier in February to start airing some PokerStars television on the FOX 2 local station in Detroit, Michigan.

But wait, what are they showing? The PokerStars Players No Limit Hold’em Championship is on.

And starting tonight, it will air across America through March on Fox Sports 1 (FS1).

The PokerStars Players No Limit Hold’em Championship, better known as the PSPC, held its inaugural tournament in January 2019 in the Bahamas. With the PokerStars Caribbean Adventure in the history books, the PSPC was something different.

As a $25K buy-in tournament, one might think it was just another high-stakes poker tournament. It was a chance for high rollers to compete but to do so alongside people who rarely compete at that buy-in level. PokerStars awarded 320 Platinum Passes in the lead-up to the tournament, each pass worth $30K for the buy-in and trip to the Bahamas.

PokerStars’ goal was to host another one. In the summer of 2019, they announced the next PSPC would take place in late August 2020 in Spain during the EPT Barcelona series.

And then…a pandemic changed everything.

Finding a Place for Footage

PokerStars did film the action in the Bahamas. All those hours upon hours of poker action, a very exciting final table and interesting players, all with nowhere to go.

But now it’s ready for TV.

As PokerStars made its splash in Michigan and just created the largest poker market in the country within days of its launch, the company had an idea. Get PokerStars on TV. And there was nothing better to show how poker is all-inclusive and exciting than footage from the PSPC in the Bahamas.

With US igaming partner FOX Bet, PokerStars handed over the PSPC footage to Fox, which started airing episodes in Detroit earlier in February. But why limit the audience to certain Michiganders?

FS1 to Showcase PokerStars to Americans

Tonight, on Friday, February 26, PokerStars will begin airing episodes of its PSPC tournament at 11pm ET on FS1 (Fox Sports 1). There will be nine one-hour episodes to run through the end of March as follows:

FOX Bet CMO Andrew Schneider noted, “There’s no better partner than FOX, who shares our enthusiasm for high-stakes action. The PSPC tournament is ready-made for TV and exemplifies everything we love about poker and showcases the type of opportunities and events we’re passionate about offering the PokerStars community.”