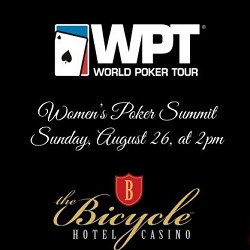 Nearly two weeks ago, the World Poker Tour hosted its inaugural WPT Women’s Poker Summit at the Bicycle Casino in Los Angeles. The range of people invited from various segments of the poker industry gathered to discuss several aspects of the live poker world that have contributed to the consistently low number of women who play live poker. The dozens of participants were predominantly female, though some key male members of the industry were invited as well.

The outcome of the conference/seminar was a list of specific problems that serve as hinderances to women and potential solutions that could help tour operators like the WPT and participating casinos address those problems.

Undoubtedly, many WPT executives, headed up by conference organizer and WPT Vice President of Global Tour Management Angelica Hael, are on the case. It will take time to coordinate the summit results as well as suggestions that followed via email and conversations.

There are some key takeaways from the summit. And there are some important base recommendations that should be at the core of conversations and actions going forward.

When poker entities want to know why more women aren’t playing poker, there is one group of people to ask about that: Women.

And when women talk about why they don’t play more poker or what happens to them at the tables or online that prevents them from wanting to play more often, the only thing to do is listen to the women.

When women talk about things that happen that make them uncomfortable in a poker setting or things that they consider to be harassment, it’s best not to interrupt, minimize their feelings, suggest things they could’ve done or should do, or defend the men’s behavior. After listening, it’s fine to ask questions but only if prepared to listen to the answers.

Finally, believe women. Most women don’t make up stories of harassment for kicks. It is not enjoyable to be harassed or verbally abused, so if women are talking about those situations, they are doing so in the hopes of finding a solution to the problem. Whether that solution is an immediate one, such as reprimanding the harasser or abuser, or a more substantive one, like finding a way to keep that situation from occurring again, women are seeking a way to stop it. And nothing will change if the victims of the harassment are not believed.

To summarize, there are three keys to figuring out why more women don’t play more poker:

Better is Not Good Enough

It is often said that things have gotten better. Women who have been playing for many years might notice that some of the harassment is not as overt or frequent. And men may comment that they’ve seen changes. That is very likely true in most poker rooms.

However, it is not good enough. Any harassment or abuse is wrong, whether it’s done by all of the men at a table or just one. No harassment of women in poker is acceptable.

The same goes for sexism and misogynistic actions of any kind, whether in person or online, at a table or in a casino hallway, in a poker forum or on social media. It must stop in all situations. And everyone that sees it or hears a woman talk about it can be a part of the change by expressing support, working to stop the offending behavior, and speaking up about it in any way possible.

Most respected poker media companies, tour organizers, and television producers have heeded advice in the past and improved their portrayals of women. Even so, outside of the World Poker Tour and female-driven organizations, there are few women in positions of power and decision-making at major poker companies. This should change if those entities are serious about diversity.

How NOT to Portray Women

In the larger gambling world, there are still many issues. Let’s look at a few recent examples:

Gaming Post is a Canadian site that publishes news about the gambling industry. A recent article on the site entitled “The World’s Top 3 Female Poker Players” contains quite a few examples of errors. The first and most obvious is the use of a featured photo of a model at a poker table, not one of the actual pros discussed in the piece.

It begins with age-old language: “The days when poker was strictly a man’s world are long gone. The ladies have arrived and are doing a pretty good job at holding their own, too.” And it continues, “Not only are more women playing the game, the best of them are more than competent rivals for their male counterparts, too, and are not afraid of taking them on, either.”

Personal note:  Yeah! We’re doing a pretty good job, we’re competent, and not afraid to play. It’s 1970 all over again!

Obviously, this is a poorly-written and unedited article with many errors, including the antiquated information about Annie Duke. Whether she should be included in the piece is another story entirely.

The point is that these types of articles are horrible examples of how women should be portrayed in poker, even in evergreen-type, click-bait articles.

The second example is exemplified in the grand opening of the new Massachusetts MGM casino with the state’s first poker room. The MGM Springfield opened in August to much fanfare and excitement as the first of several casinos to be built in the state. And many are quite excited that the facility boasts of a sizeable poker room.

But even with an updated poker room boasting of 23 tables, 16 televisions, and charging stations at each Rolls Royce-inspired seat, the casino hired “Poker Girls” for the grand opening. The picture and article were featured on the Mass Live website.

There is absolutely no reason for a decision to dress women in these outfits to advertise a poker room.

Personal note:  Someone was likely paid to design these outfits, and another person said, “Women should wear these.” Those people should be fired.

As long as women are portrayed in this way, especially to represent a game in which women are consistently marginalized and harassed, women will not feel welcomed into poker spaces.

The third and final example comes from Sputnik News, which is a Russian government-owned news agency. Even so, the article about a female UK gamer and the harassment she receives. One wouldn’t necessarily know that by the photos, words, and overall sexist slant of the article, though. The title itself is so sexist that it should’ve been axed by every editor at the site: “WoW Gaming Babe and UK’s Top Female Player Bullied Online.”

The article mentions her “sexy snaps on Instagram” in the second sentence of the lede, just before writing that the main point of the story is – or should be – that she faces abuse and murder threats. The writer then begins mentioning that she turned her gaming into a lucrative job and massive social media following, though her “cute selfies” are mentioned yet again. And only after numerous pictures of her does the writer mention that she is also a model, presenter, and brand ambassador.

By writing “her fame has also gotten her into trouble,” she is blamed for the abuse she receives.

And the body of the article doesn’t mention the murder and rape threats until the very end of the piece.

This contains just about every example of how NOT to write an article about a successful woman who is the victim of harassment, dangerous threats, and misogyny. While this isn’t exactly a reputable news outlet, the article does get numerous hits and appeared prominently in a daily Google search alert for online gaming.

The three examples mentioned here are merely the results of one month’s worth of news related to poker and gaming. And all three can be lessons for every person in the poker industry regarding the continuous mistreatment and denigration of women.