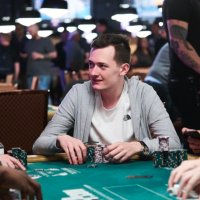 Only a few weeks have passed since the 2019 World Series of Poker wrapped in Las Vegas. The final evening of play was July 16, and many will remember it as the night that Hossein Ensan beat Dario Sammartino to win the WSOP Main Event for $10 million.

Two days prior, that Main Event final table got underway with nine players, one of whom was Nick Marchington. The 21-year-old from the UK entered the action as the shortest chip stack but hung on to finish in seventh place for $1,525,000 in prize money.

Many people believed it would not be the last that poker fans would hear from Marchington, but most didn’t anticipate seeing him as the defendant in a lawsuit for a portion of his winnings.

Alas, two men who staked Marchington in the tournament want their portion the $1.5 million, and they’ve taken him to court in Nevada to get it.

On the day following Marchington’s elimination from the Main Event – not even 24 hours later – two men filed a lawsuit in the Clark County court in Nevada. The claim was against Marchington, whom they alleged committed fraud and breach of contract.

The plaintiffs are David Yee of Nebraska in the US and Colin Hartley of British Columbia, Canada. The duo is a part of C Biscuit Stables, a poker staking company. They sued Marchington for $152,500, which was exactly 10% of his payout from the Main Event, though they also added punitive damages and legal fees.

The two also sought to obtain a temporary restraining order and permanent injunction to prevent Marchington from claiming his payout from the WSOP, and it worked. WSOP parent company Caesars did stop payment on the check to Marchington.

They Said, He Said

C Biscuit Stables is primarily a cash game staking company, formed in 2011 and now staking players from more than 67 countries. The company also provides financial backing for some tournament players, as well as coaching and education as needed. Players seeking backing must submit a sample of at least 40,000 recently-played online poker hands to be considered.

Marchington did this and sold 10% of his action for two events at the 2019 WSOP. He accepted backing at a 1.1 markup for the $5K NLHE Six-Max event and a 1.2 markup for the NLHE Main Event. He first contacted C Biscuit on May 27, and Yee and Hartley agreed to the deal on May 29. They paid him $1,750 days later for the 10% in both tournaments via a player transfer on PokerStars. Marchington received the payments, confirming with a text message: “We are booked. Let’s get rich…”

The 5k 6 max and Main Event were sold as separate stakes; they were 2 individual buys made at the same time. This was not a package. They were the only 2 tournaments I sold for over the summer.

According to the court documents, the pair of backers contacted Marchington on June 28 to confirm buy-ins for the two events, but Marchington responded that he was not likely to play either event. “I am cancelling my WSOP pieces,” he said.

The response from Yee and Hartley was cordial. “I’ve talked with the guys, and we are fine on the refund. We’d like for you to hand it over to our associate that will meet you…” But before that meeting took place, Marchington messaged them that he did plan to play the Main Event but found backers that would buy his action at a 1.7 markup. Essentially, he turned down the C Biscuit stake for an alternative deal.

However, on the same day, Marchington forwarded a picture of his receipt for his buy-in to the $5K NLHE Six-Max event. Yee was confused so wrote back to Marchington, “So I’m guessing that 5K is with our action then and that is the receipt – thanks for that. I’m guessing WSOP Main Event is still booked then with us?”

Marchington responded that the Six-Max event was being played with their action, but he was not certain about his Main Event intentions. That changed on the first day of the Main Event on July 3, when he said he was cancelling the C Biscuit stake in his Main Event action. “I am playing the Main Event but unfortunately, your piece is cancelled. I know this is bad practice, but I have to do what’s best for myself since I lost a lot on the trip. Will get back to you about your refund.”

I cancelled the piece before I registered for the Main Event.

The C Stable duo responded to Marchington, “This is not normal by the poker community standards. We’ve talked to several backers, and they said that once action is booked and money is delivered, it’s something that should be upheld. Players can’t simply book action as a placeholder and then shop around for better rates.”

He did pay in the Main Event, starting his action on Day 1B on July 4. The following day, Marchington tried to return the staking money to Hartley and Yee, but the duo had to arrange for an intermediary to retrieve the funds, and that did end up happening before Day 2 of the Main Event got underway.

Initially I offered to refund with Pokerstars (how the piece was paid) then PayPal. Finally we settled on cash. My efforts to refund began BEFORE the Main Event; the refund got collected before my day 2 of the Main Event.

Marchington’s attorneys responded to the lawsuit by noting that Yee and Hartley agreed to obtain the refund, thereby negating the deal for the Main Event stake.

The attorneys also noted that “any poker player can cancel any staking arrangement at any time before a given poker event starts by simply giving notice of his/her intent to cancel and then refunding the monies as soon as may be practicable.”

Though it is commonly believed to be bad form to conduct business in this manner, especially to cancel one agreement for a better one, Marchington’s defense is that it is not illegal.

I know and understand this was bad practice even though allowable, and I have apologised. Once I cancelled, there was no insistence the piece would still be booked when I made it clear I was still playing. Only arrangements for a refund after which we would be ‘done.’

Additionally, those attorneys claim that the backers only filed the lawsuit after seeing that Marchington cashed for more than $1.5 million, not earlier in the Main Event.

Very frustrating that I can’t comment on other aspects of the case / information out there. I believe in my case & in the legal system ✌️