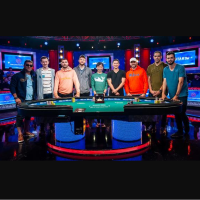 The 2019 World Series of Poker is now in the history books.

On Tuesday night, July 16, the last of the tournaments awarded bracelets to their respective winners, making a total of 90 WSOP champions for the summer.

One of those events, however, was the shining star of the series, as usual. The $10K No Limit Hold’em World Championship was also known as Event 73 but more commonly as the WSOP Main Event.

This year, that event shone even more brightly. Not only was the attendance close to setting a new record, the final table turned out to be a near-ideal mix of amateur and pro players, all with interesting stories to bring to the table.

But it was more than that.

The players all genuinely liked each other. They bonded. They wore their emotions on their sleeves. Most of their supporters were good-spirited and provided a fun audience for the players and television viewers alike. And not only were the players all grateful for their opportunities and winnings, most of them were truly and visibly happy for each other’s successes as well.

The 2019 WSOP Main Event will be remembered for all of these reasons.

The Main Event began with its $10K buy-in during the first week of July. Players had the opportunity to enter on one of three starting days or even at the start of Day 2. And by the time registration closed and the field was set, it was determined to be the second-largest in WSOP history.

The number of participants was high enough to be second only to the 2006 WSOP Main Event, the one that happened at the height of the poker boom and attracted 8,773 players.

Late on Friday night, July 12, the elimination of Robert Heidorn of the UK in 10th place for $800K set the final table. The remaining nine players took the day off on Saturday and returned to the Rio on Sunday evening to begin final table play with the minimum payout at $1 million.

Play resumes Sunday and the full final table will be broadcast on @espn and ESPN2.https://t.co/hSx05U5XkP pic.twitter.com/29IxbAVMv6

The action to start Day 8 of the Main Event was quick.

Play resumed on Monday night, July 15, and play slowed a bit for most players.

Hand 68:  Ensan accumulated more than half of table’s chips.

The tenth and final night of play was on Tuesday, June 16. Play was mostly slow and cautious, with a few exceptions, obviously.

The final hand started with Ensan holding 345.5 million chips and Sammartino with 169.5 million. On a flop of 10s-6s-2d, Sammartino check-called. The 9c on the turn brought another bet from Ensan, and Sammartino raised all-in with 8s-4s for straight and flush draws. Ensan snap-called with Kh-Kc for the overpair. The Qc on the river missed the draws and ended the tournament.