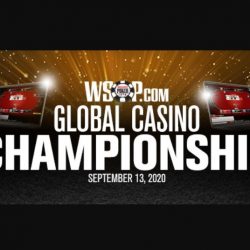 It was inevitable. The WSOP Global Casino Championship had to be online. The persistent coronavirus pandemic won’t have it any other way.

And the World Series of Poker was determined to host the Global Casino Championship in any way it could. So, it will be held online at WSOP.com on Sunday, September 13.

Of course, players will need to be located in New Jersey or Nevada to participate. There are certainly incentives to get there – a $1 million freeroll, anyone? – but the pandemic has made it extremely difficult for players from outside of the United States to travel to NJ or NV for the tournament.

What is the Global Casino Championship?

Each year, the World Series of Poker invites the winners from WSOP Circuit stops – both domestic and international – to compete in a $1 million freeroll.

Typically, a Circuit season runs from August of one year through May of the next, starting after the WSOP in Las Vegas concludes and ending before the next one begins. From each Circuit stop, there is one Main Event champion and one casino champion, the latter having won the most points at that location. Those champions receive seats to the Global Casino Championship.

In addition, the WSOP Circuit tracks players on a seasonal leaderboard, and the top 50 players also win seats into the Global Casino Championship.

In addition to those 50 players, there may be up to 154 qualifiers from WSOP-C stops – 120 from the US stops and 34 from international ones. Obviously, those numbers vary because of overlaps, as some champions also qualify via the leaderboard.

All qualifiers receive that seat into the $1M freeroll, as well as a travel stipend to travel to the location of the tournament. This year, as in the past several years, it was supposed to be at the Harrah’s Cherokee Casino in North Carolina.

There is another way to play, however. Any player who won a gold ring in any WSOP Circuit event throughout that season – domestic or international – can play, but it will cost $10,000. The benefit to playing is that the prize pool is already solid, and there is no rake on the $10K buy-in. All players in the WSOP Player of the Year rankings from the summer series in Las Vegas also have a chance to buy in.

The prize pool consists of the $1 million from the WSOP and all additional buy-ins.

Some of the aforementioned information remains the same for this year’s WSOP Global Casino Championship. The qualification rules, prize pool, and invitations did not change.

The tournament will not be at Harrah’s Cherokee, though. In lieu of the continuing virus dangers, the WSOP decided to host the action online on September 13.

Players will still receive a stipend to travel to New Jersey or Nevada to play on the WSOP.com site – the only places the tournament can be played with a shared prize pool on the WSOP platform in the United States. However, many international players will be unable to make the trip due to pandemic travel restrictions and advisories. In addition, many players may simply not want to be in the United States, which has proven itself to be the coronavirus center of the world.

Many of the WSOP Circuit stops did not take place as planned toward the end of the 2019-2020 season. There was a US-based series online and an international one on GGPoker and affiliated sites, but the number of qualifiers is significantly less than in a traditional year.

The winner will receive an official WSOP gold bracelet, as usual.

It will be interesting to see how many players from the US and international WSOP Circuit will play, and if those unable to get to Nevada or New Jersey due to the pandemic will receive any other compensation.

Just a reminder for anyone who is looking to play in the Global Casino Championship (Freeroll or $10k Direct Buy-In), you must confirm your participation NO LATER than today !