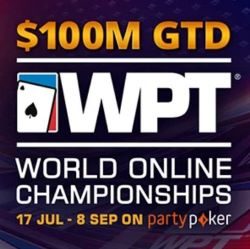 The start of the inaugural WPT World Online Championships on PartyPoker is approaching quickly. In less than one week, the new series with $100 million in prize pool guarantees will get underway.

The World Poker Tour made few changes to the series since it announced the full schedule one month ago. There are still 12 WPT-branded events, five of which will award Champions Club status to their winners, not to mention seats to the WPT Tournament of Champions. And each of the 12 primary events will offer three buy-in levels, making some of them as affordable as $33 each.

More recently, the WPT and PartyPoker announced the addition of a Shooting Stars for Charity tournament added to the schedule. It will run July 29-30 and benefit 1 Day Sooner, an organization promoting Covid-19 vaccine research through human challenge trials.

As of this week, there is more information regarding the media component of that charity tournament, two leaderboards for the entire series, and new dates for the WPT WOC Main Event.

Too often, players at smaller stakes are shut out of leaderboard competitions that focus only on the larger buy-in events. The World Poker Tour and PartyPoker decided on two leaderboards for the upcoming WPT World Online Championships series.

The Player of the Championship leaderboard will focus on players in events with buy-ins of $300 or higher. The winner of that contest will receive $50K in prize money, and the rest of the top-ten finishers will split $25K per this chart:

The Rising Stars leaderboard will focus on players in events with buy-ins of less than $300. This challenge will award points and then dole out $10K to the winner of the series, while also splitting $15K among others in the top ten as follows:

Both leaderboards will use a particular calculation to determine points:

The aforementioned charity tournament has one more component. That is the Poker Industry Invitational tournament set for July 17. It will be a $320 buy-in tournament with a $30K guarantee, with the top three finishers also receiving seats into the $1,100 buy-in Shooting Stars for Charity tournament.

People in the casino, poker, or gaming industry who want to play in the invitational must fill out an online form. Once approved, they will be added to the pre-approved list and can then buy in. The form is on the PartyPoker website through this link.

The WPT World Online Championships kick-off next week with the Invitational Industry Event.
If you work in the Gaming Industry you can fill in the attached form to register to the $320 event with $30,000 GTD. https://t.co/fcDD8bOTHF#WPTWOC pic.twitter.com/ekZu3mD9TM

The World Poker Tour and PartyPoker decided to change the dates of their WOC Main Event. The reasoning, as explained by Rob Yong, boils down to respect for the World Series of Poker Main Event.

The weekend of August 29-30 was to host the starting days of the WPT WOC Main Event. However, since the WSOP Main Event is playing online at GGPoker that same weekend, the WPT and PartyPoker moved their star tournament. The new dates are as follows:

That means that Day 1A will be September 5, Day 1B September 6, then a second and third day followed by the final table on September 9.

Back in March, told ⁦@WSOP⁩ we would never clash a Main Event with them even if they ran WSOP Online on a competitor site instead of party – seen their schedule & moved ours👍 KTF Rob pic.twitter.com/GRT4N5KcK9