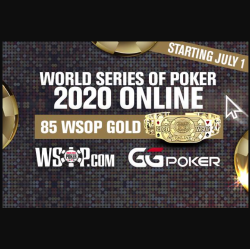 Late last week, GGPoker and the World Series of Poker announced the non-US portion of the upcoming WSOP 2020 Online. The 54 events of the 85-event bracelet-awarding tournament schedule that comprises the series connect in mid-July and run through the first week of September.

The first announcement regarding the schedule left some information to be determined at later dates but also some confusion. Players were unclear about residency requirements to play and in which countries GGPoker would be available. The schedule did not include structure sheets or starting day information for multi-day tournaments.

All in all, the schedule was complete, but questions remained.

Today, we have answers to some of those questions.

We provided a simple list of the events for the GGPoker portion of the upcoming WSOP 2020 Online last week. The events will begin on July 19 and run through Sunday, September 6.

GGPoker Ambassador Daniel Negreanu then recorded a video to talk about some changes to the schedule.

First, the $10K NLHE Heads-Up Championship was on the original schedule for August 9, but they decided to move it back one day. Sundays are typically so busy that they wanted to give players more of an opportunity to focus on heads-up. It will now be on Saturday, August 8.

Negreanu also explained a bit more about the Main Event. That $5K NLHE tournament with a $25K guarantee is set to hold its Day 2 action on Sunday, August 30. The WSOP and GGPoker have yet to determine how many flights and starting days will lead up to the Main Event. However, they have decided that each player will only be able to enter three times at the most.

Some important news about the @GGPokerOfficial @wsop this summer!

-Some clarity on the main event

-Travel rules for US Players pic.twitter.com/sbrP6A2cOx

There is still hope that there will be an opportunity to host a World Series of Poker Main Event, a $10K buy-in freezeout that will continue the annual tradition in Las Vegas later this year. The unpredictability of the coronavirus keeps that on ice for now, but if at all possible, the WSOP will try to do it.

This subject quickly became a controversial one. As American players – and other in GGPoker-prohibited territories – wondered aloud how they could travel to another country to play the 2020 WSOP, they found disappointing information. They needed a “permanent fixed address in a country that GGPoker can offer services in.” That seemed to rule out a temporary address secured to play poker.

Negreanu actually addressed that question in his video message, acknowledging the confusion. “It’s actually going to be a lot simpler than you think,” he said. “You can get an Airbnb, you can get a hotel, wherever it is you want to go outside of the United States, all you need to do is show proof of address, and you’re good to go.”

This contradicts the verification information on the GGPoker website, which requires a utility bill or bank statement bearing the address. Quite possibly, for this series, GGPoker has relaxed those requirements to allow travelers to play.

As far as the countries allowing GGPoker, the site told us that the list changes from time to time. We know that Mexico and Canada are on the list. However, the site would not provide a list. Players must “try to register for an account.” “If their country is listed in the dropdown, we should be able to accept them.”

Players hoping to find out before they travel somewhere to play, however, might want to simply contact a GGPoker customer service representative to inquire.

The terms and conditions now listed on the GGPoker WSOP 2020 page of its website notes that players can be 18 years of age and older.

The WSOP 2020 Online Leaderboard will be for GGPoker events only.

There is a separate one for the US-based series

There will not be a combined leaderboard for a “Player of the Year” race. However, according to WSOP Executive Director Ty Stewart, they “might consider a WSOP Online Player of the Year for their events on GG only.” Even so, he added that “given there are segregated fields and an imbalance of total number of events international versus domestic, it is not meant as a pure replacement for POY.”

The first of several promotions related to the WSOP events on GGPoker targets micro-stakes players. The “WSOP Silk Road” allows players to qualify directly for WSOP events with “no steps, no satellites.”

Buy-ins range from $1.08 to $21.60. And each event promises a certain dollar amount’s worth of tickets in each event. There seem to be between five and ten events daily with a range of buy-ins and guarantees.

Running from July 1 through August 31, the first week of action is listed on the promo page.

The promotion also has its own Silk Road leaderboard. The winner receives a ticket to the WSOP Main Event worth $5K. Players already possessing a Main Event ticket can receive tournament dollars instead.

The first week of events is already up at https://t.co/nidAmavO5x

For your reading pleasure, this is the GGPoker schedule for the WSOP 2020 Online, updated to include the aforementioned changes.