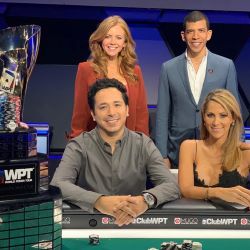 Less than four months after first announcing a strategic alliance with TV Azteca, the World Poker Tour revealed a broadening of that partnership.

The June 28 press release that the WPT will begin its broadcasts on July 12 on TV Azteca with Spanish-speaking hosts and accompanying online offerings.

In conjunction, WPTGO will work together with the TV Azteca production to promote the social poker game to Latin American audiences online and via mobile devices. The launch of the product will coincide with the launch date of the television show, all teed up for their launch in less than two weeks.

I’m STOKED to officially welcome my man @AngelGuillen25, along with @santigoal and @InesSainzG into the #WPTfamily!! Currently filming @WPT episodes in SPANISH which will premiere July 12th on @AztecaSiete!! ??♠️ pic.twitter.com/YVjqSp8M9K

The new WPT broadcasts will begin on Friday, July 12. TV Azteca’s Channel 7 in Latin American markets will begin with its debut of the World Poker Tour’s Season IX at 11pm locally.

All WPT episodes will be localized for the Latin American audiences, and the shows will be hosted by poker pro Angel Guillen and Mexican television personality and journalist Ines Sainz, along with Santiago Gonzalez Alvarez.

As TV Azteca is the top-rated sports network in Mexico and controls more than 40 local broadcast and regional stations, it has the potential to reach more than 95% of the Mexican market. And airing the WPT after futbol coverage will likely broaden the poker audience.

Ultimately, all 17 completed seasons of the World Poker Tour will be given new life and broadcast to tens of millions of viewers that may not have had the opportunity to watch the shows due to a lack of Latin American coverage and no Spanish-speaking hosts.

At the same time, WPT has worked jointly with TV Azteca to develop WPTGO, a social poker gaming site to launch with the premiere of the television show. It will be the first social gaming platform created exclusively for the Spanish-speaking market. Poker will be available on the online/mobile product, as well as casino games and a new rewards program for all players.

The long-term goal includes spreading the WPT’s popularity throughout Latin America and monetizing the WPT brand through WPTGO and WPT-branded merchandise in retail stores and online.

Further, there will be a WPT LATAM Tour announced at a later date, which will bring live poker tournaments to Latin America, all to be promoted through the WPT deal with TV Azteca. There is rumored to be up to two WPT Main Tour events and eight WPTDeepStacks and WPT 500 events each season going forward, though it is unclear if this will be incorporated into Season 18 or wait until Season 19.

The new announcements from the World Poker Tour are meant to build on the original five-year deal announced at the beginning of March between the WPT and TV Azteca.

That deal accompanies an agreement between WPT sister company Allied Esports and TV Azteca parent company Grupo Salinas. That deal will see the companies work toward the development and launch of an esports strategy for Mexico.

That strategy will include a live esports experience in some form, esports content, and an online platform, all for the Latin American market, including Mexico. Little is known of what to expect from this agreement, but more is likely to be announced in the coming months.

Back in the early 2000s poker took off, and now @WPT is huge. Now, sister company @alliedesports plans to use a similar model to capitalize on a much larger opportunity – @frntofficesport – https://t.co/ZFyxSTbt4K

Future CFO of Allied Esports Entertainment Ken DeCubellis emphasized the integration that will be taking place over time between WPT and Allied Esports. “We expect Grupo Salinas and TV Azteca to be exceptional partners,” DeCubellis said. “We are fully committed to using our vast network to completely change the social gaming market in Mexico and to ensure that these games are available to all people in ways that are catered to them.”

This is all a result of the 2018 acquisition of WPT and Allied Esports from Ourgame by Black Ridge Acquisition Corp. Putting poker and esports under the same large umbrella will allow the two to work together, and Latin America seems to be the primary initial target for that work.