US Should Take Note of European Liquidity 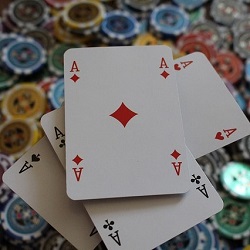 Most states in America have yet to understand or embrace the potential of legal, regulated online poker. Some European countries have been slow to realize the possibilities, but recent developments show that they now understand. The segregated markets of France, Spain, Italy, and Portugal are prepared to come together for online poker liquidity, sharing player pools in order to expand the industry and enable more profitability for everyone from operators to countries.

US legislators often view poker as a live game while associating online gaming with chance-based games like slots. But their inability to see the bigger picture, the one that existed globally and in living color prior to the UIGEA, prevents them from seeing a future for online poker. That future could consist of a new and thriving industry, job growth, technology, and entertainment.

The online poker industry was a global phenomenon before individual countries began enacting laws to limit it. The United States was the prime example of such a law with the passage of the Unlawful Internet Gambling Enforcement Act (UIGEA) in 2006 and the federal indictments that followed on Black Friday in 2011. The actions of the US, along with others like Italy, France, Spain, and Portugal, clipped a lucrative and continually growing market, forcing online poker sites to exit major markets.

Later in 2011, the US Department of Justice handed down a decision regarding the Wire Act, which restricted its interpretation so that online poker, gambling, and lotteries were no longer included. That gave states the authority to legalize said games, though only three states have done so in the five-plus years following that ruling: Nevada, Delaware, and New Jersey.

European countries took a vastly different approach to regulating their markets. While closing their virtual borders to sites like PokerStars, they opened a licensing process so sites wishing to do business with their citizens could obtain permission and configure their sites to fence in those country’s customers.

The nationalization of online poker in some of the largest markets in the world was the end of the poker boom, as well as the end of many operators who simply couldn’t afford licensing fees and required technology to operate in segregated markets. Various countries felt that they could control online poker and gambling more efficiently, as well as keep tax and license profits for their own coffers. And some, like Germany, continue to struggle with a regulatory process, while the US has chosen not to regulate on a national level whatsoever.

France, Italy, Spain, and Portugal have all implemented successful regulatory regimes for the online poker market. However, they eventually realized what consumers had been complaining about all along, that a ring-fenced market severely limits the number of players who can benefit from playing online poker regularly, in any type of professional or semi-professional way. The player pools are too small, tournament guarantees insufficient, and rewards not beneficial enough to warrant regular play.

The online gambling regulators from these four countries began talking several years ago about the possibility of sharing player pools to improve on those downfalls of limited markets. Conversations with each other as well as industry analysts and online poker operators eventually led to regular discussions and enough of a collaborative effort that an agreement became possible.

Finally, the summer of 2017 brought good news. The regulators announced they would meet in Rome on July 6 to sign an official agreement to share online poker liquidity. The agreement will then allow concrete steps to be taken to eliminate any technical barriers, work out tax schemes, and inform operators of details pertaining to their licenses and fees.

Breaking News: The 6th of July, Gaming Regulators of Spain, France, Italy and Portugal will sign a convention for poker shared liquidity!

How Does This Pertain to the US?

American states continue to hesitate to pass online poker legislation. While some reluctance is due to moral objections and a general fear of “gambling,” much of it points to an uncertainty about the technology. How does a virtual border fence work? Are customers safe from gambling pitfalls? How do we keep the industry from getting out of control?

Legislators can look to a number of organizations and companies for information, but the topic often seems too complicated. Meanwhile, however, New Jersey has not only conquered all fears and mastered the details of creating a ring-fenced market in the United States, they have shown that their partnerships with land-based entities are profitable for all involved.

Pennsylvania is close to becoming the fourth state in America to legalize online poker. New York failed to follow through on its proposed legislation, California hit a stalemate after ten years of trying to manage special interests, and other states don’t seem ready to embrace the internet as a beneficial extension of their gambling enterprises. The bigger picture, however, shows that more states entering the market opens doors of opportunity for sharing liquidity and growing this industry once gain.

Looking back at the poker boom shows the potential in the online poker market. And looking at the European countries ready to band together to grow the games again shows that some have learned from the ups and downs of online poker thus far.

America has yet to see the industry for its possibilities, but a shared European market may show by example.