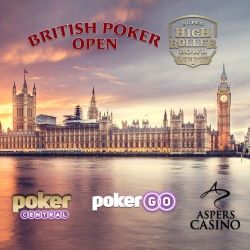 The year of Poker Open action started in February.

Poker Central hosted the 2019 US Poker Open at its PokerGO studio in Las Vegas in February. Buy-ins ranged from $10K to $100K in the 10-tournament series. By February 23, all events had been completed and David Peters emerged as the overall points leader.

As the year progressed, Poker Central announced several initiatives, including a partnership with PartyPoker LIVE. But its expansion beyond US borders didn’t stop there, as the company also announced the inaugural British Poker Open.

The BPO was scheduled to take place at Aspers Casino Westfield Stratford City September 2-12. PartyPoker LIVE was the sponsor.

And to top it off, it will be followed by the first-ever Super High Roller Bowl London on September 13.

Events will stream live on @PokerGO from September 3-15: https://t.co/QzSG6oebiu pic.twitter.com/PCbaVnZu4F

The BPO is now more than half over, so let’s take a look at the first five events and winners.

The opening event of the BPO drew 26 entries (an email from Poker Central claimed 29 but live reports and other news outlets set it at 26). The resulting prize pool was £260K.

The tournament allowed two reentries before Level 10, but there were no final numbers provided as to how many of the 26 entries were unique players and how many were reentries.

Only the top four finishers were to be paid, but five players made the final table. Mike Watson ended up bubbling as the second day of action got underway, and the final four then finished it out with these results:

The second event brought in 30 entries (reentries included), which created a £300K prize pool. That was to be used to pay the final five players.

Six players went on to play Day 2 of the tournament, but Jens Kyllonen fell early on the money bubble. The next five went on to battle it out for the title and top prize. They finished as follows:

The third event topped the other two thus far in terms of entries with a total of 46. That pushed the prize pool to £460K to be paid out to the top seven finishers.

As Day 1 came to a close, eight players remained. On that money bubble, Koray Aldemir eventually busted. Play then continued with some double-ups and Stephen Chidwick eliminated in seventh place to end the day.

Though Paul Newey started Day 2 with one of the shorter stacks, he stayed the course and ended up winning for his first-ever tournament victory.

This hold’em variation garnered only 24 entries in total, including reentries. That meant a prize pool of £240K and only the ability to pay four players.

Five players made it into Day 2, but when Danny Tang busted in fifth place, that left four people for the win. Sam Greenwood eliminated chip leader Cary Katz and went on to win, just as his twin brother had done in Event 1.

To round out the first half of the BPO schedule, the buy-in was upped to £25K. There were 28 entries when registration closed, presumably including reentries. And the prize pool was set at £700K. Even so, only four players would be paid.

Day 2 began with just five players in action and Sam Soverel in the chip lead. Vicent Bosca quickly busted in fifth place, and Soverel went on to win.

This win put Soverel in the lead for the overall BPO title. The points leaderboard showed him with 480 points and £501,200 worth of winnings in the series at the halfway mark. He was far ahead of Sam Greenwood in second place with 260 points and £147,200 in winnings thus far.

Sam Soverel continued his sick London with a win and extended his #BPO 🇬🇧 lead. ⬆️https://t.co/Tm9QedNMlG