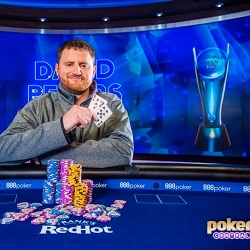 Last year, Poker Central debuted the US Poker Open, a series of live high-stakes tournaments played at the PokerGO Studios at ARIA on the Las Vegas Strip. It was a big enough hit with players and fans that it returned this month for its second iteration.

The series offered 10 tournaments, each with buy-ins between $10K and $100K. From No Limit Hold’em to Pot Limit Omaha and mixed games, high rollers had the chance to compete for substantial prize pools.

The series wrapped on February 23 after 11 days of poker action that was livestreamed on PokerGO. Filming of the US Poker Open will also be edited for a future broadcast on the NBC Sports Network, dates of which have yet to be determined.

Let’s check out all of the results:

Note:  Chidwick won two events and the championship tournament at the inaugural USPO.

Note:  Lauren Roberts became the first woman to win a USPO title thus far, as few – if any – women enter most of the USPO tournaments.

ICYMI: @PlayPokerLkAMan took down #USPO Event #3 and became the first female #HighRollerTripleCrown winner in the process! Read about the historic victory and then relive the action on @PokerGO!https://t.co/cYL2jiFMcs pic.twitter.com/upLYqPohJk

Note:  Winter made final tables in each of the first three events of this series before winning this one.

Note:  This was Chidwick’s second win of the 2019 series, putting him on top of the annual standings for the series. He edged ahead of Sean Winter with this victory.

Note:  Sean Winter’s final table tied him with Stephen Chidwick for the leaderboard standings in the series, each with 540 points thus far.

Back-to-back $100K wins and this time @dpeterspoker17 takes home the series title! @RemkoRinkema catches up with the #USPO Champion! pic.twitter.com/p6jOx2V0Ew

The concern about points throughout the US Poker Open pertains to the High Roller of the Year race hosted by Poker Central. Since its events throughout the year are focused on buy-ins of $10K or higher, it made sense to reward players who steadily compete at that level.

Points are accrued for each in-the-money tournament finish, and the eventual winner will be awarded an automatic seat into the next Super High Roller Bowl, a seat worth $300K.

The US Poker Open was the first series of events to garner points in 2019, with the next events being the Los Angeles Poker Classic (LAPC) High Roller tournaments March 3-5 at Commerce Casino.

As of now, the leaderboard shows USPO champion David Peters in the lead. And for winning the most points during this series, he won a cash bonus of $100K.