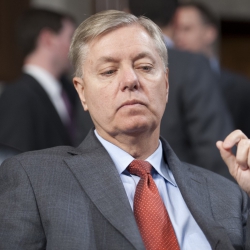 Members of Congress have busy schedules. And in today’s world, with so many important issues to handle amongst the chaos of current news cycles, those elected to the Senate and House of Representatives always have something urgent to tackle. With so much to debate and discuss, prioritizing is imperative.

This is especially true for senior members of Congress like Senator Lindsey Graham from South Carolina. Having served since 2003, the 63-year-old has worked his way up the leadership ladder and serves on numerous committees. And as of January 2019, it seems that he will become the Senate Judiciary Committee Chairman.

Graham is now giving new meaning to multitasking, as if the campaign donations for his next election in 2020 depend on it. In addition to dealing the dozens of high-priority issues facing Congress and the US government in general as 2018 comes to a close, Graham is also very concerned about legal online gambling and how to ensure that a 2011 Department of Justice decision is overturned so states can no longer choose whether or not they want to regulate games like online poker.

WATCH: @LindseyGrahamSC tells AG Sessions in Senate Approps Cmte hearing that "Senator Feinstein and I are very worried that this bizarre interpretation of the Wire Act by the Obama administration is going to lead to holy hell ungoverned spaces when it comes to internet gambling" pic.twitter.com/I1DqOLSRbv

The issue of banning online gaming is nothing new for Graham. His opposition of playing games for money on the interwebs goes back years.

Graham was one of several members of Congress incensed when the Department of Justice issued a legal opinion in late 2011 to clarify the Wire Act of 1961. New York and Illinois had requested an interpretation as it related to offering online lottery ticket sales, and the DOJ responded by concluding that the Wire Act only pertains to sports betting. The decision freed states to offer lottery tickets online, as well as other forms of gambling, such as internet poker and casino games.

The “Holder Justice Department” – as Graham called it because Eric Holder was the US Attorney General at the time – became the focus of Graham’s ire. “In 1999,” he wrote in a press release in 2014 when introducing the Restoration of America’s Wire Act legislation,” South Caroline outlawed video poker and removed over 33,000 video poker machines from within its borders. Now, because of the Obama Administration’s decision, virtually any cell phone or computer can again become a video poker machine. It’s simply not right.”

Since that time, Graham has introduced several versions of that same bill, commonly referred to as RAWA, and tried to attach its language to budget bills and other must-pass legislation. Each time, his effort to ban online gaming has been defeated.

Importantly, Graham is not familiar with the internet, what it can and cannot do, and what limitations and parameters can be used with the internet to regulate online activities. He even admitted in 2015 that he had never sent an email. Someone who doesn’t use the internet probably shouldn’t be tasked with regulating what happens on it.

You guys, Senator Lindsey Graham has *never* sent an email and he's on the subcommittee for technology.

Eyes on New US Attorneys General

When Donald Trump won the presidency in 2016 and soon after nominated US Senator Jeff Sessions for the position of US Attorney General, Graham was elated. During the confirmation hearings for Sessions, Graham asked about the 2011 Wire Act decision and received a favorable answer. Sessions said that he did oppose that decision and added, “I would revisit it or make a decision about it based on careful study.”

As it so happened, Sessions was confirmed as the new US Attorney General, but months later, he was forced to recuse himself from any issues pertaining to online gambling. That was due to Sessions’ close ties with casino mogul Sheldon Adelson, who had made it his life’s work to ban online gambling.

Graham wasn’t able to push the issue further with Sessions because of that recusal, but it should be noted that Graham has also been a consistent beneficiary of Adelson donations to his political campaigns. What a coincidence!

In November 2018, Trump forced Sessions to resign, and the search for a new US Attorney General began. One of the strongest names to emerge thus far has been William Barr, who served as the US Attorney General under President George H.W. Bush. And when Gambling Compliance asked Graham about the Wire Act and his hopes to overturn that 2011 decision, Graham responded, “This will be one of the first things I will talk to Mr. Barr about.”

Scoop here by @GamblingComp. We view the move as little more than Graham genuflecting toward a major benefactor and doubt that the DOJ, whose independence under Barr will be the subject of daily media coverage, will expend any political capital on a reversal of the 2011 opinion. https://t.co/DJkQ1my26b

Graham intends to ask Barr for an updated written decision on the Wire Act, one that presumably will remove the states’ rights to legalize and regulate online poker, casino games, and lottery sales. Meanwhile, these activities have been successfully happening in Nevada, Delaware, and New Jersey for more than five years, and Pennsylvania is preparing to launch its online gaming sites in early 2019. There will likely be court challenges if the Department of Justice reverses its stance on the Wire Act.

It should also be noted that Graham is likely to have even more influence as of January 2019, as Senator Chuck Grassley is stepping down from his position as Senate Judiciary Committee Chairman and has suggested Graham as his replacement. All signs point to Graham taking that position.

With Graham in an influential position on the committee and fairly widespread support for Barr throughout Congress, he may get his wish to see Barr take the AG spot. And if Graham can spread his influence even further, Barr may be willing to instruct the Department of Justice to reconsider the Wire Act decision.

Trump confidant Lindsey Graham on William Barr: “He’d be an outstanding choice. … I think he could get confirmed very easily.”https://t.co/kyzRFBkzPx