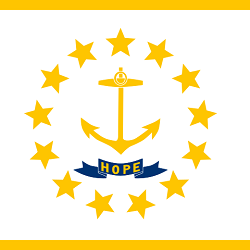 United States online gambling analysts may have to change their predictions for states likely to consider new legislation in 2018. Rhode Island expressed interest in online gambling this week, and though the reference was probably pertaining to online sports betting, the broader mention could be a sign that the little New England state is considering a larger part of the industry.

New Jersey recently concluded its arguments before the US Supreme Court in the state’s fight to offer sports betting. The case has been a long time in the making, but Governor Chris Christie and other state lawmakers finally made their case before the highest court in the country. They will have to wait for a decision until the spring or early summer months, as the Supreme Court generally takes several months to write their rulings, especially with regard to cases that could have a large impact around the country.

Meanwhile, many states anxiously await the ruling, as sports betting is an industry that could deliver significant revenue. While online gambling remains contentious in many states, online daily fantasy sports and sports betting remain less divisive and more popular.

During the interview, the reporter asked about the sports betting case. Conley responded, “I’ve been wrong before, I can be wrong on this one, but the lawyer in me says that the states are going to prevail here, so that’s going to be an opportunity for Rhode Island.”

The reporter then asked, “If the states prevail, you’d be open to online gambling here in Rhode Island?”

“Absolutely,” state Conley. “I do think that the Senate President thinks that that’s something that we should look at seriously and that it could bring in revenue. … It wouldn’t be impossible to get a piece of legislation through this session if the Supreme Court rules that the states have the ability to do it.”

Rhode Island Curiosity of the Past

As New England states have generally opened to brick-and-mortar gambling options, Rhode Island was no different. The small state started as most do, with lottery and pari-mutuel betting, but legislators soon considered expanding the longstanding Lincoln Downs racetrack to include other games. The establishment added video lottery terminals, similar to slot machines, in 1992, along with blackjack machines.

A large group of investors haggled with MGM Grand in the early 2000s for the right to expand racetracks in Rhode Island, and the BLB investors won. They bought Lincoln Downs, expanded it, and reopened it in 2007 as Twin River Casino. Ownership changed hands, but operations continued. Voters then approved a referendum in 2012 to allow the addition of table games. Twin River then purchased Newport Grand in 2015, which is in the process of a casino/hotel expansion.

Casinos in Rhode Island have an incredible amount of competition in surrounding states, so the offering of sports betting or any type of online gambling would likely improve its chances of increasing revenue and competing in a more serious way for gambling customers.

As reported by Online Poker Report in 2014, Rhode Island considered online gambling after the 2011 Department of Justice decision was made regarding the Wire Act, giving states the option of operating their own internet lotteries and online poker and casino games. The state authorized an exploratory committee to look into their options, but nothing came of it in the form of legislation.

Then, in 2014, Rhode Island Lottery Director Gerald Aubin noted that online gambling was only a legislative problem. While he expressed concerns about the online lottery hurting land-based lottery ticket sellers, he actually supported online poker and casino games as a substantial revenue boost. However, the problem, he noted, would be voter approval and the willingness to change the state’s constitution. Aubin remains in charge of the lottery, and it is likely that his openness to online gaming has not changed.

While many states await the US Supreme Court decision regarding sports betting to make all online gambling decisions, other states may take preliminary steps earlier in the new year to advance the process.

Rhode Island is going to face gambling competition from several states as Pennsylvania enters the online gambling space and others like New York seriously consider joining the group. Competition will become more intense on the East Coast, and Rhode Island could get ahead of the game by at least ordering a study or holding a hearing about online gambling possibilities, with or without sports betting.

The comments from Conley last week moved Rhode Island into another category of online gaming possibilities in 2018. It’s going to be one to watch.