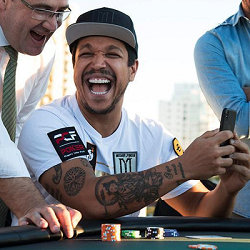 Felipe Ramos has been a star in the poker world for about a decade. For several of those years, the Brazilian poker pro was signed to Full Tilt Poker for a time and then a member of Team PokerStars Pro, both affiliations which garnered more attention for his poker play on a global stage.

That PokerStars affiliation lasted less than three years, however, as Ramos and the site severed ties in late 2017. “The company’s priorities have changed,” he said at the time. Since then, efforts between Ramos and PartyPoker to ink a deal never happened.

But none of that stopped Ramos, an ambitious young pro with a passion for the game.

Just this month, Ramos signed on as the first ambassador of Ascensus Interactive, which runs the new Players Come First (PCF) Poker on the Microgaming Poker Network (MPN). The move signifies a new start for Ramos and a strong start for PCF Poker.

Proud to finally announce this! It has been a great pleasure working with the Ascensus gang so far – they are a great team who really have the players' interests at heart. https://t.co/dWJsdjMCsR https://t.co/0vd26izDBX

The news started to flow in mid-April 2019 when PCF Poker launched on MPN.

Ascensus Interactive was founded in 2018 to specialize in “launching gaming brands in specific markets and catering to specific demographics around the world.” The London-based company touts a “dedicated, responsible and charitable approach to iGaming. It has already launched Firehouse Casino and PCF Casino, and it partners with the more well-known Poker Pro Labs, an online poker software tools and services provider.

With PCF Poker as its initial poker brand, Ascensus CEO and co-founder Eugene Castro said they want PCF to be the “cornerstone of our offerings.” And choosing MPN as the network on which to debut the site was an easy decision. “We had planned early on to get on board with the MPN because of their innovative software, industry-leading management tools and outstanding passion for poker.”

Ascensus co-founder Hilly Ehrlich echoed that sentiment. “Having been associated with many poker networks, I am confident the MPN has the right formula and people not to mention terrific software.”

And MPN Managing Director Alex Scott seems excited to see how the site performs. “I am impressed by the team’s collective experience and talent,” he said, “along with their dedication to responsible gambling and corporate social responsibility, which fits in perfectly with our ethos at Microgaming.”

The Sao Paulo native has more than $2.5 million in live poker tournament earnings to his credit, putting him into second place in all-time earnings in Brazil behind Alex Gomes. Most of Ramos’ successes have happened in Brazil, but he also made final tables of major tournaments in the United States, Germany, Australia, Bahamas, Belgium, South Africa, Macau, Panama, and the Czech Republic.

Ramos is also known for being an entrepreneur, having established a poker coaching and seminar business that includes the likes of famed soccer legend Neymar Jr. as clients.

Since mid-2018, MPN has been rolling out a new and upgraded platform for its poker sites. The new client was called Prima, named after the site started in 2003 (Prima Poker) that eventually transformed into the Microgaming network.

The perks of the new software were many, including improved graphics, hand history functionality, and easier navigation. And it allowed for MPN to more quickly update the poker platform when needed.

And those updates have continued through the first part of 2019. The latest v40 installment came complete with a long list of new features, such as cloud-based opponent notes with color-coding, a customizable bet slider, tournament break advertisements, quick access to SNGs and casino games, reduced download size and CPU usage, and numerous bug fixes.

Version 40.3 was just released in mid-April 2019, and it offered faster table opening speeds and an even further-improved bet slider. Updates will continue as needed, and the MPN staff will inform players on its blog and via online poker forums.