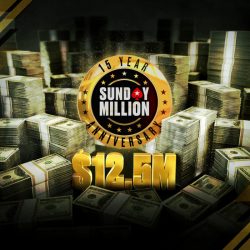 There are a lot of “mark your calendar” days in the online poker world right now. One of them happens to be kind of a big deal. It is the 15th anniversary of the PokerStars Sunday Million, and the celebration will happen on March 21, 2021.

The advanced notice gives players plenty of time to play those satellites and win a seat into the $215 buy-in Sunday Million at a discount. Last year’s winner of the 14th Anniversary Sunday Million qualified for just $4 and won more than nearly $1.2M.

This weekend might be a good time to get started.

One of the best ways into the #SundayMillion Anniversary this month is via satellite. And there's a big one coming up this Sunday…

Not many tournaments become such a staple in the online poker world that they stick around for 15 years. PokerStars was smart enough to develop series like the WCOOP and events like the Sunday Million that stood the test of time.

Guarantees generally increased during the history of the Sunday Million:

This year, PokerStars didn’t feel super adventurous, so it is keeping the guarantee at $12.5M for the prize pool. Perhaps the unknown effects of the pandemic on players were a factor.

Any PokerStars player can opt in through the “challenges” window. They will find several challenges each day, including things like playing 250 hands in cash games, knocking out a player in an MTT, or playing seven SNGs. The completion of each one will earn the player a ticket to that day’s ticket machine draw. Players can earn up to three tickets per day through Sunday, March 21.

Of course, there are also Sunday Million tickets and satellite tickets up for grabs in special Spin & Go tournaments, too. The three-player hyper-turbo events cost $4 to enter and will award cash – as usual – plus the Sunday Million prizes.

The tournament will require a $215 buy-in for those who don’t win their seats. The event starts on Sunday, March 21, but an extended late registration period will allow players to buy in all the way to Monday, March 22.