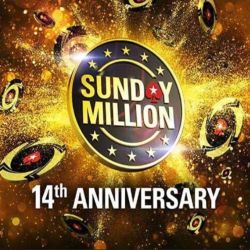 It was a massive tournament, bigger than most could have anticipated.

PokerStars set up its 14th Anniversary Sunday Million with a $12.5 million guarantee as the biggest online tournament ever offered on PokerStars. The three-day tournament had its usual $215 buy-in, typical for a Sunday Million, but offered more satellite seats than usual as well. And players had the opportunity to reenter the tournament up to five times during the long – 24 hours long – registration period.

The final numbers were quite impressive.

Impressive Numbers by All Standards

It began on Sunday, March 22. Thousands upon thousands of players logged in to play.

It's time.
💰$12.5M Gtd
🤑 Two $1M+ prizes
💤 Late-reg open for 24 hours
Our biggest online tournament ever is under way. Good luck to everyone playing the #SundayMillion 14th Anniversary. 🤞 pic.twitter.com/qh8g084bxT

More players participated than may have otherwise as casinos around the world had shut their doors to prevent the spread of the coronavirus. Players who may have preferred live poker to online action got involved. It is difficult to know how much of the record-setting numbers were a result of little to no availability of live poker, but PokerStars had done a solid job of promoting the anniversary tournament for several months.

When registration ended for the PokerStars Sunday Million 14th Anniversary online poker tournament on Monday, March 23, these were the stats:

It should be noted that this tournament became the largest ever for PokerStars and the third largest in the history of online poker, behind the PartyPoker MILLIONS Online, which delivered $21.78 million in 2018 and $21.09 in 2019.

When Day 2 began, registration ended, and those numbers were announced. Play then continued to push the field into the money, and the night ended with just 91 players still in action. The player with the most chips was “meandmyarrow” of Canada, and every player was guaranteed at least $10,910.77 for their work.

Interestingly, a player named AAAArthur from Brazil was not even in the top 30 players going into Day 3. But a lot can happen at the online poker tables.

That Brazilian, who won their entry to the Sunday Million tournament through an $11 satellite, went on to the final table as the shortest-stacked player but survived some tough play. At the point that only four players remained, AAAArthur made a four-way payout deal as the chip leader and then went on to win the tournament for nearly $1.2 million and the title.

The final table payouts, which reflect adjusted payouts for the top four players per the chop decision, were as follows:

Brazilian player "AAArthur" qualified for the #SundayMillion 14th Anniversary edition (the biggest tournament ever held on PokerStars) for just $11.