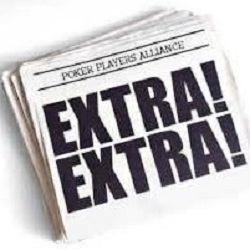 The #PPAsurvey is still live and we want your feedback. Take the survey, and you may win $200! It's that #easy! https://t.co/OpqlzFPtkX pic.twitter.com/pmcmiYxVtb

This is the first of several articles dedicated to revealing and analyzing the survey results.

Licensing and Regulation of Online Poker

Three of the primary questions in the PPA survey directly addressed the opinions surrounding the legalization and regulation of online poker in the United States, as well as what respondents would be willing to do to help further the progress of such efforts.

Question:  Do you believe the federal and/or state governments should allow licensed, regulated online poker?

This was a rather obvious result, considering most people taking the survey have some type of interest in the PPA’s mission of pushing for favorable laws for poker players in America. While the group supports land-based and internet poker, the primary focus has been on the latter, especially since the passage of the Unlawful Internet Gambling Enforcement Act in 2006. When online poker came under attack and the US market began to shrink, the PPA focused almost exclusively on helping to remedy the situation.

It would be interesting to find out what the two percent of negative respondents were doing on the PPA’s website and completing its survey to begin with.

Question:  What are you willing to do to help legalize online poker in your state? (Choose all that apply.)

If 79% of PPA members and followers actually contacted their elected officials regarding internet poker, politicians on the state and federal levels would be taking the issue much more seriously than they currently do. The PPA offers almost-daily ways to contact legislators with pro-poker messages. With that said, many poker players and enthusiasts find the daily barrage of messages too much to swallow. When an organization asks people to act daily, it can be overkill and lose the urgency of the cause.

Donations to the PPA are clearly an issue, especially when only 19% of the respondents expressed a willingness to donate, and that is only a willingness, not a promise. And it is for this exact reason that the PPA accepts funding from companies like PokerStars, as a lack of funding could completely erase the poker industry’s only nationwide lobbying organization. If the same players who complained about the PPA’s tendency to advocate for PokerStars when the greater good of poker is on the line (ahem, California online poker battle) would donate to keep the organization funded, it would make more sense.

The PPA may need to hone its message and action items. However, the fragmented nature of today’s poker community makes it difficult to figure out what might work better.

Question:  Why do you believe more states have not licensed and regulated online poker? (Choose all that apply.)

The two most popular answers are entirely accurate, as most lawmakers do not understand online poker or feel that it is important enough to warrant attention. While there could be brochures or some type of information passed on to more legislators, it is an expense that the PPA may not be funded to handle at this point in time. The same goes for the idea that insufficient money is going toward lobbying.

The notion that the gambling industry is not working together is very pertinent, as organizations like the American Gaming Association (AGA) has only recently even acknowledged that it should help with online gaming regulations. The lack of cohesion between these groups is a problem for the industry. Moreover, if lobbying groups like the AGA would work more closely with the PPA, the latter would have more funding and a louder voice with lawmakers.

As far as the arguments and approach for legalizing online poker being wrong, according to 13% of respondents, it would be interesting to hear viewpoints on a better message. The PPA has honed its message according to what has worked in its 12-year history in advocating for poker on the state and federal levels, so it is unclear where some people feel that message may be missing the mark.

Feedback on this article is very welcomed and encouraged. The survey may have produced more questions than answers, but the discussion is certainly necessary in the current US online poker environment if there is any hope of enhancing and broadening the industry.