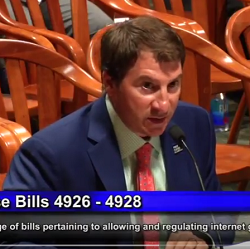 The Poker Players Alliance has been immersed in the battle for legal and regulated poker in the United States, especially in the online sphere, since 2005. The organization’s scope has expanded in recent years to include online gaming, as long as internet poker is also at stake, because the two are often examined together. New Jersey is the most prominent and successful example, and that has forced the PPA to change course from its original mission. However, the main goal remains focused on poker and lobbying for it wherever necessary in America.

Poker players have mixed feelings about the PPA. While most seem to support its work, some object to its close partnership with Amaya Gaming, now called Stars Group and still parent company to PokerStars. Some feel it has tainted the PPA’s view on internet poker legislation in California and contributed to the stalemate that has drawn out the poker fight there for ten years and counting.

While those concerns are valid, the PPA continues to fight for all online poker players in other states – New York, Pennsylvania, Illinois, and Michigan in 2017 – and on the federal level. The group advocates for regulated online poker, whether or not it includes online casino games, and fights against proposals that would outlaw poker, such as the Restoration of America’s Wire Act aims to do.

And speaking of Michigan, the PPA represented at a House committee hearing there last week.

We created a YouTube "play list" that has all the testimony from yesterday's Michigan #iGaming hearing. https://t.co/fWruYDDG68

Testimony for Online Gaming in Michigan

PPA Executive Director John Pappas attends most of the hearings at which he can make a case for legalized and regulated online poker. He travels to any state, sometimes on very short notice, to be present, give testimony, talk to legislators, and answer questions.

Last week, when Michigan abruptly announced that State Representative Brandt Iden was introducing an online gambling bill and holding a hearing to discuss it, Pappas secured a spot for testimony and made the trip there. He read the legislation that was made public on Tuesday, educated himself about other speakers – both for and against the bill – and prepared written testimony to submit to committee members on Wednesday.

On the day of the hearing, Iden introduced Pappas, who then thanked Iden for introducing HB.4926 and hosting the hearing. Then he immediately acknowledged the previous speaker’s “rhetoric and fear-mongering,” saying that the facts do not match the rhetoric with regard to online gambling concerns. His points then included:

Pappas tried to show an example of how many online gambling sites he could find immediately via Google’s search engine, though he was blocked from doing so because the Capital building itself blocks gambling-related websites. The demonstration wasn’t as effective as he hoped, but his point was still made that the unregulated marketplace is not safe or secure, though it could be made so via a regulated industry in the state.

And in respond to several questions from committee members, Pappas gave succinct and fact-based answers regarding benefits of regulated sites and tax revenue from them.

Michigan lawmakers may not be able to pass bills in the House and Senate this year to legalize online gambling. In fact, Iden admitted that the main purpose for introducing bills this year and holding hearings is to allows lawmakers to familiarize themselves with the issue and allow interested parties to discuss the details in order to iron out any differences. Iden said, “Today starts the conversation. There’s no intent for an immediate vote on these bills.”

The PPA’s place on the front lines of the debate, however, ensures that any information given to legislators is based in fact, and people like Pappas can refute illogical and incorrect testimony from opponents like those representing Sheldon Adelson. Pappas’ knowledge of the online poker industry, both regulated and unregulated, is important to keep the discussions centered.

If online poker has a chance in Michigan or any other state, the PPA is the sole representative of the movement that always has a seat at the table and can advocate for regulation instead of prohibition or the unregulated market.