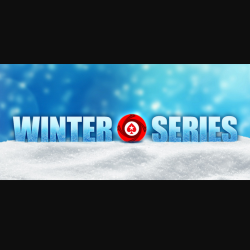 A series for every season…is not PokerStars’ motto, but perhaps it should be. It seems as if there is always an online poker tournament series wrapping up at the same time that another one is on tap.

Just a few weeks ago, the MicroMillions series wrapped, which led into the High Rollers. That series from December 1-9 offered $11 million in prize pools for the 27 tournaments. And it wrapped up with a Main Event that attracted 515 entries and awarded $2,575,000 in prize money.

While most might take time off for the holidays, PokerStars is getting ready to kick off its Winter Series, complete with 242 tournaments and $50 million in guarantees.

There are a whopping 242 tournaments.

Each unique event typically offers three versions – at low buy-in, medium buy-in, and high buy-in levels – to accommodate players of all bankrolls. A few – like the Sunday Million – retain their usual buy-ins. But there will be 34 tournaments with buy-ins as low as $5.50 and 47 events with buy-ins of more than $1K.

Included in the mix will be a Sunday Million with a $3 million guarantee, a Phase 2 event, and an entire week of high-stakes events.

Speaking of that Sunday Million, this is the big one to end the year:

The Phase 2 tournament is already underway with a $109 buy-in and massive $2.5 million guarantee. It is officially dubbed Event 1 and wraps on January 12.

Christmas Day will offer a plethora of options:

But New Year’s Day has a bigger offering:

Of course, the highlight of the series for most players is the Main Event, which will guarantee $4.5 million in its three iterations:

The full schedule, including links to all qualifiers, is on the PokerStars website.

As with all PokerStars series, there will be many satellites offered in which players can win their seats into larger buy-in tournaments.

For the Main Event, for example, there will be approximately $30,000 worth of satellite tickets awarded. Those start as low as $2.20.

The same goes for the $3M Sunday Million, with satellites starting at less than $1 and already running.

Other ways to win seats include Spin & Go 10’s, which will be at the $4 and $40 levels. Players can also look out for Christmas Calendar Chests and Stars Rewards Chests.

To make it easier to qualify for the Winter Series events, PokerStars is running an extensive schedule of satellites including New Years’ Resolution value satellites kicking off on January 1 and promising $60,000 worth of added tickets.@anuj2212 ⬇️https://t.co/y3LzFxHRHs