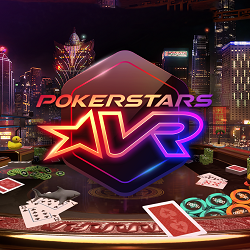 When PokerStars first previewed the idea of virtual reality online poker in September, many players were excited about the prospects. As virtual reality gaming becomes more popular in some gaming circles, mixing that with poker seemed like the perfect way to mix the convenience of online poker with some of the best characteristics of live poker.

In November, PokerStars VR became available for download on popular platforms like Oculus Rift, HTC Vive, and Steam. And in little more than a month, it has become one of the top-rated and most-frequently played games, even surpassing 1,000 members on its Discord channel.

So far, the game is free to play and still in beta testing mode. Several major updates have been released thus far, with the latest on December 17 to fix a few bugs but also to reveal a holiday theme. The Winter Wonderland release adds new features for players, holiday gifts, and even higher stakes.

Virtual reality gaming allows players to compete in more realistic settings than ever before. PokerStars VR is the first online poker product in this genre that has been capturing the attention of gamers for several years. Players must use a virtual reality headset, but it allows them to look around the virtual table and the poker room, interact with other players, and use images and sounds never before available in the internet poker world.

PokerStars teamed up with Lucky VR to develop PokerStars VR, and it gives players the ability to handle their cards and chips, interact verbally and physically with opponents, and use interactive props to create unusual and exciting scenarios.

As VR becomes more popular, prices for VR headsets become more reasonable. While the top-rated headsets still cost upwards of $300 or $400, there are other options with fewer features that start as low as $50.

Lucky VR has been working with PokerStars to consistently work through bugs and glitches while also upgrading the product throughout the beta testing period.

The largest update since PokerStars VR’s download release was on November 20, when Beta09.2.4 was revealed. Per player feedback and a general improvement process, there were a variety of updates made to the product.

Some of the bug fixes addressed quick seating actions, VOIP information, button freezes, finger abilities with relation to cards, and lobby improvements. One that was initially concerning was “taking pictures of other players’ hole cards when not revealed,” which yielded an obfuscated texture for all players. But considering the game is in free-play poker mode and in beta testing, the problems were fixed without much hoopla.

That update also added some features, such as more Stars credits paid at the end of each hand, less turn time, default table listings, volume changes, and a way to see when friends are seated at other tables. The most fun change is that players can now throw fortune cookies harder to break them open.

The Beta09.2.5 update on December 5 handled more bugs, such as with LIV mixed reality and OpenVR. Other features include the wheel spin reduced to only eight-hour intervals, a free load of ammunition with revolvers, a new table filtering menu, and new props like apples and Dublin pipes. On the fun side, the cactus is now able to smoke. (I suppose one has to see that to understand it fully.)

This week, PokerStars VR added a wintery scene in the poker lobby and many festive features. The Santa character is played by Chris(tmas) Moneymaker, and numerous PokerStars ambassadors make appearances as his elves. They will pop into games with giveaways.

The bug fixes are few in the Beta0.9.2.6RC1 update are limited to chip unselectables, smokables, endgame payouts, and something about a Roman candle.

The additions for the holiday season are numerous, including every player receiving a present from under the tree. The lobby and cards are decorated for the season, and players can now wear elf and Santa hats, reindeer antlers, and various other headgear. There are snowballs for throwing, snowmen card protectors, stockings and gingerbread men, snow globes, pies and cookies, and a candlestick.

Regular players will also be pleased that players are no longer removed from tables at the time of the leaderboard reset on Sunday nights, and the $100/$200 stakes are now open around the clock for players with a minimum bankroll of $200K…in play money.