PokerStars Celebrates One Year in Pennsylvania 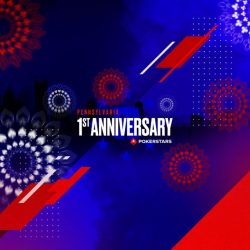 In fact, one year later, PokerStars remains the sole online poker provider in Pennsylvania. Other operators applied for licenses and earned them this year, but they appear to have no desire to launch in 2020.

Meanwhile, PokerStars earned nearly $33 million in revenue through September 2020 and will likely surpass $35 million when the Pennsylvania Gaming Control Board releases its October numbers.

With that, PokerStars wants to celebrate with its 1st Anniversary Series this month, complete with $1 million in guarantees across 35 events.

It’s time for players across the state to come together for an iconic moment. The Pennsylvania 1st Anniversary Series is here!

PokerStars has run numerous series in its first year, with everything from bounty-based series to COOP tournaments and Pennsyl-MANIA events. Most recently, it wrapped its PACOOP 2020 after paying out more than $2 million in 50 events.

The PokerStars 1st Anniversary Series will run from November 8-15 with 35 tournaments.

In addition to a Main Event (with a $100 buy-in and $200K guarantee), there will be a Mini Main Event, Sunday Special, and Phase tournament, all with significant guarantees. We’ll get to the schedule in a moment.

Players should know that there will also be seven Second Chance Freerolls with $10,500 in tournament tickets. All satellites open now start as low as $1.

Without further ado, the schedule…