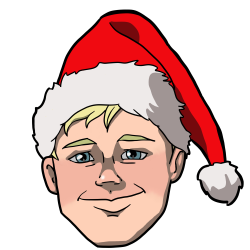 At certain times of the year, PokerStars introduces changes, promotions, and innovations in clusters. So, we sometimes collect them and put them together in one article so as not to become the PokerStars News Channel. (PNC has a ring to it. PokerStars, I’ll take a small commission if you use the idea. Just sayin’.)

Some of the PokerStars news items in recent weeks have included a new holiday theme for its virtual reality games, a new look for Spin and Gos, and a Christmas promotion featuring Team Pro Benjamin Spragg in Spraggmas.

The rollout and promotion of PokerStars VR has been a long and arduous process. Making one’s way into the new and changing virtual reality world is challenging.

PokerStars first previewed its virtual reality product more than a year ago, and about 100 players tried it. Many more have played since then, but it remains a somewhat niche community of players. Considering that the game requires a special, expensive (by some standards) headset, it’s not simple to just pull it up and start playing.

Even so, it has been gathering followers on Oculus Quest, Viveport, and Steam. So much so that PokerStars announced the first Virtual Reality Poker Tour (VRPT) in September.

The free-to-play series started in September and offered more opportunities to compete in October and November. That last leg of the series was set for November 29 to December 1 with three events: Millionaire Maker requiring a 100K-chip buy-in, Main Event with 5M-chip buy-in, and Ultra High Roller with 25M-chip buy-in.

A brand new poker tour from @PokerStars and you don’t even need to leave the house to play.

It’s called the VRPT. It's free, open to everyone, and starts this month. Here’s how to play… https://t.co/DGrQXDMnyl pic.twitter.com/LzNSEQSSvh

Just before that iteration of the VRPT took place, PokerStars VR introduced a new space for the games to take place. The Spies theme was set in a fortress at the top of a mountain, complete with props and gadgets from the inside of the villain’s home in an active volcano. If it sounds sinister, it is supposed to be. The secrets contained within the compound are an added bonus to the poker action.

Poker Managing Director and Commercial Officer Severin Rasset commented, “There are no limits to what we can do at PokerStars VR. It’s been a very exciting first year. Players have gone head-to-head in a wild-west saloon, a Monte Carlo yacht, a futuristic Macau, and now they can live their poker dream as a spy or super-villain, with jet-pack monkeys thrown in for good measure.”

No winners have yet been announced from the VRPT.

This news was delivered by Pokerfuse on December 5, which reported that the new update appeared without fanfare. PokerStars updated its Spin and Go lottery-style SNGs with new buy-ins, blind structures, and a new Jackpot game.

The Spin and Go lobby showed that a recent software update delivered new and lower buy-ins for the Spin and Gos. While the highest and lowest buy-ins didn’t change, others did, such as the $15 buy-in that was reduced to $10 and the $60 that became $50.

A new blind structure is in place to allow more time for moves in tournaments with higher multipliers.

Also, the special Spin and Gos with $2 million and $3 million prizes are now replaced with a Jackpot Spin & Go with a $1 million top prize. This change happened approximately one week after a player from Germany won the $2 million prize in a Spin & Go.

PokerStars announced its December holiday promotion last week with focus on one of its Team Online members. Ambassador Ben “Spraggy” Spragg is a regular Twitch streamer for PokerStars and will be required to complete challenges throughout the month.

The holiday celebration was dubbed Spraggmas.

Essentially, Spragg will livestream on Twitch for at least 12 days in December, each with a new challenge to complete during that stream. Each completed challenge garners a $215 ticket added to a freeroll. It is rather unclear how this benefits players. But players can receive an $11 ticket by being one of the first five players at the table when Spragg streams, though they must be using the Spraggmas avatar.

There should be more information forthcoming to clarify how players can benefit from the promotion.

The countdown to 'Spraggmas' has begun.

Should he complete them, you lot could stand to win some excellent prizes.