PokerStars Looks Forward to Look Back with Unfold 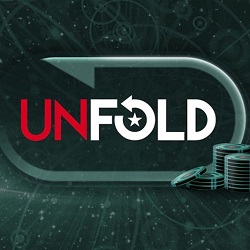 PokerStars has spent the last few months rolling out new poker game variations to entertain its players and to figure out what new features might spark new interest. What might strike the right tone with new players that would make them flock to the tables? What could add an extra bit of intrigue to traditional poker to boost interest? What game would be challenging enough to bring veteran players into the mix with analysis and strategy?

The online poker giant has tried several games this year. There was Split Hold’em, featuring a version of running the board twice. Next was Showtime, which turned all folded cards face up.

Rumors then surfaced of a game called Fusion, reportedly a mix of Hold’em and Omaha similar to Irish Poker. It was supposed to be rolled out before Unfold, but Fusion never saw the light of day.

As for Unfold, this is the one that garnered the most attention from potential players. And those making decisions at PokerStars decided that Unfold would be the next game revealed.

Last month, hints about Unfold began to leak out, albeit purposefully and strategically. And it soon became evident that Unfold was going to be the next game made available to PokerStars players.

The general idea was that players who folded their hands would be able to play in a bonus round of the game in which they could unfold their hole-cards and play on after seeing the board.

Dear PokerStars UNFOLD players: We know. Oh, do we ever know. https://t.co/8DHETPnbyc pic.twitter.com/EbK6XO8dpu

PokerStars did, in fact, introduce Unfold just days ago.

Unfold will be available in no-limit hold’em cash games with a minimum of four players at the table. Every player will post an ante that becomes the separate Unfold pot. The game then proceeds as normal until the flop is dealt. If any player who folded pre-flop regrets that decision and wants to unfold his or her hand, that player may pay an Unfold bet, which totals the sum of the previously-tallied Unfold pot of antes. Those players are then done betting, but other players can continue betting on the turn and river for the main pot. Even if the main pot is awarded before the river, the final community cards are dealt for the sake of the Unfold pot.

It should be noted that Unfold antes are collected in Unfold-eligible tables with the minimum number of players, but those antes may be returned if the main pot is decided before the flop is even dealt, if fewer than two players fold pre-flop, or if no players decide to Unfold after the flop.

More details are explained on the Unfold page at PokerStars. And Pokerfuse obtained a video of some sample hands:

Unfold was introduced to players in the Denmark market on August 1. The small-market release is likely PokerStars’ way of testing the final product with real money for a few days or weeks before rolling it out to larger markets. The initial days of play allows PokerStars developers to make any final tweaks to ensure no issues will plague the tables after a more widespread release.

Days later, however, PokerStars launched Unfold for dot-com and dot-EU players. The company then told Pokerfuse that the game will now be a permanent fixture in the PokerStars lobby. Instead of trialing the game as with others in the past, Unfold will stay. This will give players a reason to spend time developing strategies and investing time into learning the intricacies of it.

Games are available for as low as $0.03/$0.06, and a special promotion of freebuy turbo tournaments will be running temporarily to award several thousand dollars for players to get into Unfold games.

According to Pokerfuse, PokerStars Director of Poker Innovation and Operations Severin Rasset said, “This has never been done before. Unfold means more action and opportunities for players, reducing the all-too familiar sinking feeling of making the correct pre-flop laydown, only to then find you would have flopped the nuts. We’re very excited to offer something new and completely different.”

It looks like the extra side pot will be 5%-8% rake (WTF) in addition to the original pot rake!!

I talk strat for the game, the potential for this type of format, the reaction on twitter & more. pic.twitter.com/hVUXWXsvmw