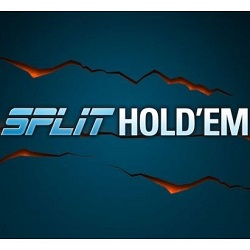 It’s tough to blame PokerStars for trying. The most popular online poker site in the world consistently develops new games, new poker variations to intrigue players. They want to enhance the experience of the regulars and bring new players to the tables with the promise of something unique and different.

This time, it’s Split Hold’em. There are similarities to the idea of “run it twice,” the notion that the odds do play a significant role in hitting those key hands. Many cash game players in live games run it twice – meaning to see the community cards again after the initial hand is complete – to reduce variance and show that they made the right decision with that all-in move or call.

PokerStars believes its new cash game format will bring that excitement to the online tables.

What is Split Hold’em?

Split Hold’em is described simply: two flops, two turns, and two rivers. A hand that goes to showdown must win both boards to scoop the pot. New strategies may be employed when calculating the odds for two boards and knowing there are two chances to hit the right cards.

Running it twice, as in Split Hold’em, does add some excitement to the game and reduces variance as split pots can save a player from rebuying as often or leaving the game. New strategies can be devised to maximize chances of winning both runs of cards. It has the potential to raise the level of analysis and provide players with a new challenge at the tables.

By the Way, Seat Me

Buried in the announcement about Split Hold’em is the revelation that the dot-com market will all be playing with the Seat Me system going forward. This is something that has been used in specific markets thus far, such as the new France-Spain poker liquidity network, but the broader rollout is also now in place for all players.

In Spain + France + Portugal (the “startup” of an european shared mkt) they’re enforcing the use of the “Seat me” option… no more table selection or seating script…
In a few months we’ll se how & if that works against bumhunting.

Seat Me is a process by which players are automatically seated in cash games. They choose their stakes and game choice, of course, but they no longer get to choose their own tables.

Automatic seating has its perks, the primary one for most players being the elimination of a practice called bumhunting. Some pro players could seek out weak players or use seating scripts that found inexperienced or losing players on which the pros could prey. Those tools and methods discouraged many newer players from returning to the tables once busted, and it evens the playing field. It mimics live play, in that most live poker rooms don’t allow players to choose their tables and seating assignments.

The new lobby system (blind lobby) has been the norm for all of PS product launches for the last 2 years. I'd expect Zoom to switch over and ultimately all cash games to have something similar (Seat Me system or otherwise)

Many other sites have already implemented automatic seating or other options, such as Bodog’s anonymous player system, to discourage the use of programs and styles that put many players at a disadvantage. PokerStars had a tougher time changing to Seat Me due to the numerous markets in which it operates and the push-back from players who already lodged numerous complaints about various changes in the past several years.

When the face of @PokerStars is openly mocking the current system in place at high stakes, it's clear many changes need to take place.

While Seat Me seems to be a rollout that will end in a permanent solution, the Split Hold’em games are not. According to the announcement, “The game will not be a permanent addition to the PokerStars offering so play while you can.”

It is unclear how long the new variant will be available, but it will likely depend on its popularity in the coming weeks and months.