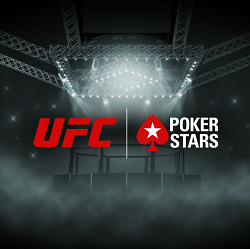 PokerStars first announced a marketing sponsorship with the UFC in December 2018. It put PokerStars in the ring as the official poker partner of the UFC (Ultimate Fighting Championship), with that first branding on display in late December at the UFC 232 event.

Part of the ongoing partnership between the two would include PokerStars branding during UFC telecasts and on digital platforms and social media. At the time, the poker giant also noted that “other promotional opportunities” were in the works.

Some of those other opportunities have been coming to fruition, such as UFC-branded SNGs, numerous articles about mixed martial arts crossovers with poker, and informative blog posts about the UFC.

Most recently, the relationship between PokerStars and the UFC jumped to a new level with the announcement of three new PokerStars ambassadors from the UFC world. The voice of the Octagon, Bruce Buffer, has been a longtime poker player and was once a sponsored player for Full Tilt Poker, but the other two names are new to the game – UFC heavyweight champion Daniel Cormier and light heavyweight fighter Johnny Walker.

It appears that the trio of ambassadors will be at the center of more PokerStars promotions to come.

The announcement came just prior to UFC 237 in Rio de Janeiro, Brazil. Team PokerStars Pro and native Brazilian Andre Akkari was there to welcome the three new ambassadors to the roster.

“For me and for many Brazilians, poker and MMA are passions,” he said.

As for Buffer, known best for his voice in the Octagon, he has been racking up poker tournament scores since 2005 and playing as a hobby for many more years. It led him to a contract with Full Tilt Poker before Black Friday, but nothing has stopped him from playing whenever his career allows.

Buffer commented, “This partnership brings together two heavyweights of the entertainment world and, luckily for me, two of my great passions. I’ve been a poker player all my life. I’m a regular at the tables in my hometown, and I remember seeing Moneymaker’s legendary performance back in 2003 right before he became of member of Team PokerStars. To join him alongside this great lineup of athletes and poker pros is a great honor for me.”

Light heavyweight fighter Walker talked about the challenge to sharpen his poker game and to “represent PokerStars on their journey with the UFC.”

As mentioned, one of the promotions to emerge from the PokerStars-UFC partnership thus far was the UFC-branded Spin & Go. The faster version of a traditional SNG is offered starting at the $0.25 level for the chance to win thousands, and games go up to $5 and $25 buy-ins, which provide the chance to win up to $2 or $3 million.

Along with the introduction of these games in early April, players also had the chance to win branded UFC merchandise, in-person experiences, and meet-and-greets with UFC fighters.

There have been other promotions as well. Recently, there was a “Tap Out or Bluff” social media competition, wherein people were invited to view a video of a poker hand and guess if the player tapped out or bluffed. Winners were awarded seats into a freeroll, and the winner of that tournament won two ringside tickets to the aforementioned UFC fight in Rio, along with flights and accommodations.

New Spin & Go tournaments were recently introduced. These UFC-branded events cost $10 to play and offer a prize package to the UFC fights in Las Vegas this July.

The future for PokerStars and UFC may present many more surprises, as the partnership seems to have only just begun. It’s only a matter of time before the public is aware of them.