PokerStars Gears Up for MicroMillions 15 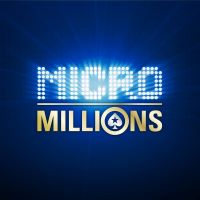 As the action begins to wind down in Las Vegas at the World Series of Poker, PokerStars is preparing to launch into one of its most exciting online poker events of the year. Most poker players did not make the trek to Las Vegas for poker this summer, and they are anxiously awaiting an affordable online series, one they virtually flock to each year.

PokerStars will host its 15th edition of MicroMillions, the immensely popular low-stakes series that provides online tournaments for the masses.

MicroMillions 15 will again offer buy-ins between $1.10 and $5.50, with the exception of a $22 buy-in Main Event that will offer a $1 million guarantee. There will be 146 tournaments in all, including 11 unique events with poker variations including 6+ Hold’em, Showtime, and Fusion.

@PokerStars @PokerStarsDE I absolutely LOVE the concept of #MicroMillions. As a student with a small bankroll this is not only my chance to grind out a whole tournament series, but also my chance to tell my friends to try poker since the barrier to entry is so low. #keepitup

The 15th running of the popular series will kick off on Sunday, July 14 with these events, giving an example of what will be available throughout the 14 days of action.

That gives an idea of the variety of poker tournaments, buy-ins, and guarantees that will be offered during MicroMillions 15.

It will all culminate in a $22 NLHE Main Event with $1 million guaranteed. (Last year, a Canadian online player won the MicroMillions Main Event for nearly $121K.) Players will be able to qualify through numerous qualifiers, include $0 free-buy satellites.

The #MicroMillions Main Event Master was marlin5555! ? Congratulations to the Canadian, who defeated a gargantuan field of 63,817 entries to pick up a first prize of $120,951.34. ? pic.twitter.com/HSErWcEUBU

All tournaments will have deep structures, comparable to formats used at the WSOP and on the European Poker Tour.

Tournaments on the MicroMillions schedule will run through Sunday, July 28.

One of the features of this year’s MicroMillions will be a series of Second Chance Shootout tournaments running from July 22-28.

Any player eliminated from a MicroMillions event before the money bubble will automatically receive a free ticket to a Second Chance All-In Shootout that will take place the following day at 10am. From there, players can win tickets to Second Chance Shootouts running from July 22-28, each of which will award $4K in other MicroMillions events tickets.

In addition to normal qualifiers running for all of the MicroMillions events on the schedule, Spin & Go players will have other opportunities to win for as low as $0.40.

The fast-fold, three-player turbo tournaments will award cash prizes of up to $4K in cash or MicroMillions tickets, including some to the MicroMillions Main Event. Other tournament tickets to be awarded will be worth entries into $5.50, $3.30, and $1.10 buy-in events.

It should be noted that 7.5% of Spin & Go buy-ins are removed for rake.

All players will be able to win special Challenges centering around tickets for MicroMillions tournaments. Each player will be offered games in their individualized Challenges window, with everything from Zoom to Spin & Go events that are tailored to that player’s style and bankroll.

PokerStars School will also give its members a chance to win MicroMillions tickets through a special tournament series. Non-hold’em games will be featured to give players the opportunity to work on skills for other variations. They will also be able to win tickets via a Question of the Week.