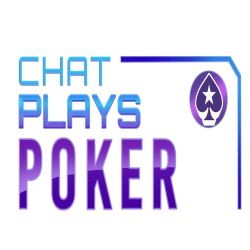 For the past few years, it has been increasingly obvious that the future of online poker is in the livestreaming realm.

Twitch has been the ideal platform for the action, as players can showcase their play and entertain the audience. And fans can tune in and interact with the player while also learning more about the game as they watch every move of that player.

PokerStars has embraced Twitter for several years. Its Team PokerStars Pros play on the channel regularly. It also streams live games and preserves videos, of which there are now nearly 800 in the vault.

The PokerStars Twitch channel has more than 217 followers, though more tune in regularly without a subscription. A Tier 1 subscription is $4.99 per month, but Twitch Prime members can also view everything on the channel.

Now, PokerStars is taking it up to a new level. Chat Plays Poker is a new way to participate in Twitch poker online. It was developed with Team PokerStars Pro Jason Somerville and his Run It Up team.

What is Chat Plays Poker?

As explained by PokerStars, Chat Plays Poker is an interactive poker viewing format that allows viewers to participate in the game instead of just watching and typing in the chat box.

Viewers simply tune in to a Chat Plays Poker session, and they can vote on actions. The viewers literally get a collective seat at the table, and a voting process dictates what moves that seat makes.

Today is the day we crush souls. #POSITIVITY

An Idea Became a Reality

Somerville has long been a leader in the livestreaming online poker world.

He was the first to stream games from his basement in Las Vegas when Nevada legalized online poker. He turned those streams into his own Run It Up channel, complete with merchandise for sale. And he took that into business with an entire Run It Up venture, which partnered with PokerStars.

With the help of the online poker giant, Somerville can take his ideas to new heights, such as he is doing with Chat Plays Poker.

The games take place, initially, at Somerville’s Run It Up Studios in Las Vegas.

What was an idea for a more interactive poker game turned into more with the help of point-of-view cameras, a large chat display above the table, and a text-to-speech function that allows viewers to make a donation in order to speak directly to the players.

First Edition in the Books

Somerville was the host and guided viewers through the motions in NLHE to compete against Chris Moneymaker, Joe Stapleton, and Jesse Fullen of Run It Up.

At the end of the game, Moneymaker did a reality-television-style confessional. He talked to the viewers and interacted with the chat, all in good fun and spirits.

In the end, the viewers won the most money in the game, which meant that more than $1K went to charity.

Works Well with Run It Up Live Home Games

Somerville launched his home game broadcasts this summer, live from his studio. It turned out to be the basis for Chat Plays Poker.

The games are played on a table in the main room outfitted with RFID to track the action and small cameras, all sent to a production crew behind the scenes. And instead of playing to the audience on a delay as with most poker streams, this live home game is truly live.

we’ve been hard at work developing our new Run It Up Live Home Game.

I’m quite excited about all the different shows and unique game types we’ll be able to run on the platform.

learn more about it from our friends @PokerStarsBlog https://t.co/orZmjbRUAH

The goal is to maximize interactivity with viewers. This is when the confessional was introduced – the Twitch Chat Confessional, officially. And it’s all in the name of making poker more interactive, more engaging, and more entertaining.

Somerville is always thinking ahead, hoping to expand to live home games and Chat Plays Poker in other languages, with mixed games, and more.

As long as Somerville has a platform for his ideas, as well as a partnership with PokerStars, the sky is the limit for the Run It Up.