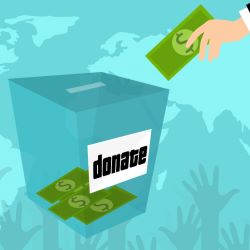 The poker community has stepped up to help its own when the coronavirus pandemic began to spread across America. Throughout March, casinos and card rooms began closing around Europe, the United States, then Canada and Australia. Everyone from poker players to dealers and other members of the community found themselves without income.

Of course, a few members of the poker community immediately stepped up to help. Katie Stone started a Discord channel to enable people to share the ability to help or the need for assistance. Many people reached out on Twitter and other social media avenues to do the same.

And then they began to organize. Let’s see what is in the works.

Dan Smith is known for his charitable giving, and he is the founder of Double Up Drive.

Some of his friends and fellow poker players teamed up with him to help raise money and awareness for “effective altruism charities.” The pros named on the Double Up website include Matt Ashton, Stephen Chidwick, Elio Fox, and Daniel Cates. Aaron Merchak and Martin Crowley are participating daily fantasy sports pros.

The double-up aspect comes into play with smaller donors, whose contributions are doubled.

There are numerous charities that meet the standard of effective altruistic giving, including GiveWell, Good Food Institute, International Refugee Assistance Project, and StrongMinds. In all, the group’s 2019 contributions to 12 charities totaled $1,710,762.

In light of the COVID-19 crisis, Double Up Drive partnered with GiveDirectly, an organization that delivers cash directly to families in need. The first households to receive $1K in cash will be those enrolled in SNAP in the Bay Area, Las Vegas, New York City, and Seattle.

Double Up Drive pledged $250K and will match up to $500 of every donation made to GiveDirectly until their funds are exhausted.

Proud to announce another @DoubleUpDrive

We have $250,000 in matching funds going to
@GiveDirectly COVID-19 Fund. The program is simple: giving $1000 cash to those who need it most.
Thanks to this drive, they are going to launch in Las Vegas.https://t.co/6bYsJxbARA

Run It Once Poker

Longtime poker pro Phil Galfond took years to build an online poker site, one with everything that players had been wanting for many years. He built Run It Once Poker with the continuous input of players and launched it in early 2018.

Galfond has continued to upgrade and mold Run It Once to become a bigger force in the world of online poker and to give players a voice in the industry.

In light of the desperation of so many in the world due to the coronavirus pandemic, Galfond partnered with Double Up Drive to host a tournament to raise funds that will go to GiveDirectly’s COVID-19 Emergency Relief Fund.

Though Run It Once is typically available for real-money poker only to countries like the UK and unable to offer services to players in the United States, this tournament is special and is open to players everywhere in the world. And they’re raising money in two different ways.

Open to anyone worldwide 👇 https://t.co/QIsixsdGTl

First, Run It Once is hosting a charity heads-up tournament starting at noon on Saturday, April 11. There were 16 poker pros who signed up to participate, and they will be facing 16 qualifiers. Those qualifiers earned their seats over the past week by donating to GiveDirectly. Eight of those seats in the tournament went to people who donated the largest sums of money, and the other eight spots were randomly awarded to people who made any donation whatsoever.

Even some pros who won their qualifying seats through their large donations gave their seats to others, like Scott Blumstein did.

I’m giving away my qualifier spot in the @RunItOncePoker charity streamed tourney. The first 50 people who respond to this tweet with the pro participating they’d most like to beat HU in the championship will be entered into a random drawing for the seat. https://t.co/BlyHcCyFaD

The pros in the lineup include:

The bracket will begin playing out today, starting at noon ET, 15:00 UTC. The campaign already raised more than $25K for GiveDirectly and is still growing.

Run It Once will award numerous gifts to the winner, including the Run It Once Training A-Game Poker Masterclass, three months of Elite training and access to the Vision GTO trainer.

The tournament will be available for public viewing all day on Saturday on the Run It Once Poker Twitch channel with Joe Stapleton as the primary host.

For every player who plays at least one hand of poker on Run It Once Poker on April 11, the site will donate €10…for every single player.

The flagship site of the Winning Poker Network, Americas Cardroom, is hosting a massive charity tournament on Saturday, April 11, starting at 2pm ET.

All 100% of the proceeds will be donated to Feeding America, which is responding to the COVID-19 crisis by providing emergency food boxes and drive-through food pantries across America.

And to kick it off, Americas Cardroom donated $1 million.

Well I have never been happier to be apart of something.#BeSafe pic.twitter.com/ZOGy8Hd0LJ

The tournament is called the All-In for America Celebrity Poker Tournament. Players can buy in for $10,000, all of which goes directly to Feeding America. Anyone can donate to Feeding America and provide a receipt to ACR for an entry through besafe@winningpokernetwork.com.

Speaking of celebrities, there are quite a few big names committed to playing:

I’m in and I’m playing fast and loose just like your grandma’s butt https://t.co/P9tf0rkzIz

As for poker names, the godfather of poker leads the lineup:

–probably quite a few more

Come play a charity tournament with me at @ACR_POKER tomorrow at 11:00 Pacific. The proceeds go 100% to Feed America. pic.twitter.com/bl4wtD8gAg

I'll be playing and likely streaming this! Awesome gesture by @ACR_POKER to be donating $1,000,000 here!

Time to fire up my Twitch stream! I’ll be streaming LIVE at 11 AM PST as I play in “All-in For America” Charity Poker tourney w: @BenAffleck @TomBrady Matt Damon @BryanCranston and others. Picking up at least $1 Million for https://t.co/UwBBwxVEHj Here: https://t.co/4HzgeYdtqK

The tournament will be livestreamed on Twitch via its ACR channel. Michael Loncar and Justin Kelly will call the action.

One of the best things about this day of charity action is that people are crossing all normally-forbidden lines to do it and promote it.

Run It Once and Americas Cardroom are promoting each other’s events. Players like Staples and Gross, both affiliated with PartyPoker, are competing in and promoting the ACR event. The desire to raise money for good causes in a time of great need is bringing out the best in poker players.

What an exciting day of poker tomorrow! There will be TWO live-streamed charity events! Events like these bring the poker community together. Good luck to all participants! https://t.co/rItEs4pymx