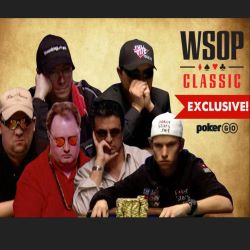 With many poker players and fans still spending more time than ever before at home, Poker Central increased its online output in the past few months.

Poker Central took its two flagship tournaments online, both to PartyPoker. First, the Poker Masters Online played out through late April with 30 tournaments and more than $15 million in guarantees. When the series finished, it had awarded more than $35.4 million. Second, they took the Super High Roller Bowl online as well and made it into a tournament series of 28 tournaments beginning May 23. It offered nearly the same action as the Poker Masters and just wrapped on June 1.

For those uninterested in watching high-stakes online poker without hole cards, Poker Central delivered several new, original shows to its PokerGO subscription service. One was 2020 Hindsight, wherein Matt Berkey provided new analysis for some of the most legendary World Series of Poker final tables.

The latest Poker Central announcement involves making available WSOP Main Event footage from some of the most pivotal years in the game.

Poker Central announced this week that it will debut footage of the World Series of Poker Main Event from 2003 through 2010. The footage will comprise the new shows called WSOP Classic.

Through July 24, new episodes are added daily from the @WSOP Main Event from 2003 through 2010 with final table action taking place every Friday!https://t.co/bC7ebZMLkX

Shows began on June 8 on PokerGO and will run daily through July 24. Those with subscriptions can watch all of the shows live or in the archives.

WSOP Classic will deliver footage from 134 episodes of the WSOP Main Event to viewers during those important years of poker. These will include memorable wins by Chris Moneymaker, Greg Raymer, Joe Hachem, Jamie Gold, Jerry Yang, Peter Eastgate, Joe Cada, and Jonathan Duhamel.

Beyond those episodes, the show will take fans back to 2003 when Phil Ivey became a star and to 2005 and 2006 when controversies captured fan and player attention during those Main Event tournaments prior to their final tables.

Each week of the show will cover a different year of that period in poker history.

Further, on Independence Day weekend, Poker Central will air special episodes of the 1973 WSOP Main Event (on July 4) and a marathon of other years’ Main Event action from 1987 through 1989 (July 5). This coverage will feature Johnny Chan’s back-to-back victories and Phil Hellmuth’s takeover of that winner’s circle.

This series of broadcasts through most of June and into July are timely, as the 2020 WSOP in Las Vegas was postponed due to the coronavirus pandemic. While there will be some online tournaments beginning in July that will award gold WSOP bracelets, it will be drastically different from the usual summer of poker action that players and fans have come to expect. These shows will highlight some of the past years of that action.

Poker Central CBO J.R. McCabe mentioned that “unmatched, electric energy” that will be absent this summer. “We decided to bring some of the most memorable games in WSOP history, many of which have not been available for broadcast since original airing, into the homes of fans and players alike.”

As mentioned, the Super High Roller Bowl Online – the first series of its kind – wrapped with its last tournaments in the first days of June. The series launched on May 23 and played out more than two dozen events online at PartyPoker through the beginning of June.

Poker Central has not provided any overall numbers to demonstrate the level of the SHRB Online’s success. However, we can look at the Main Event and the winner of the overall series.

The finale of the series was a two-day $100K buy-in NLHE tournament, one that drew 50 entries, setting the prize pool at $5 million. Only 13 players survived the first day of action, and Ali Imsirovic led when Day 2 began. But Imsirovic departed in ninth place, and Orpen Kisacikoglu busted next, a position that was also the money bubble.

The final table action moved quickly to leave Michael Addamo and Justin Bonomo to battle for the title. More than an hour later, Bonomo took it down.

These were the payouts:

SHRB Online Player of the Series

Throughout the Super High Roller Bowl Online, many players vied for the Player of the Series title. Players accumulated points for their finishes in all of the events, all in the hopes of winning a free entry into the finale, which was (as mentioned) worth $100K.

Viktor Blom spent most of the series at or near the top of the standings, but Russian poker pro Artur Martirosian snuck up give Blom a run for the title on the last day of play.

And in the end, Martirosian did it. He commented to Poker Central, “I am very happy. I spent a lot of effort, time, and emotions during this leaderboard race, but it all ended perfectly. … This is an excellent result. I plan to continue to play all these series and spend even more time working on a game outside the series.”

The top three players in the final standings were: