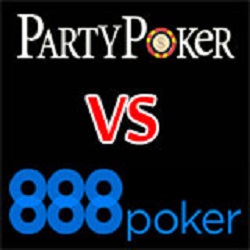 For many years, a poker sponsorship with PokerStars or Full Tilt was the pinnacle of one’s career, the great achievement that could offer new opportunities to players and the chance to be on the same team as names like Ivey and Harman, Seidel and Hansen. When Full Tilt folded, PokerStars’ team reigned supreme with Negreanu at the head of its stable of pros. But several notable players have departed in recent years, with Jason Mercier and Vanessa Selbst doing so just in recent weeks. The roster remains strong but not exactly the powerhouse it once was.

Over the past several years, however, two sites have been building teams that seem to be strategically formed to appeal to the widest possible range of poker players and fans. Recent signings by PartyPoker and 888Poker only confirm that the sites are serious about forming powerful rosters.

We are proud of each and every one of our #teampartypoker members. Click the link to learn more about our amazing ambassadors and pros. https://t.co/jNAr4pHu4D pic.twitter.com/xa5WT2a16w

PartyPoker had been putting players in sponsorship positions for several years after Black Friday. Names like Patrick Leonard and Dzmitry Urbanovich were significant, but they needed one person to stand out as Negreanu and Moneymaker did for PokerStars.

Enter Mike Sexton. He had been a part of the original group that developed and launched PartyPoker, staying closely associated through the years and aside from other ventures. Sexton spent 15 years as a World Poker Tour commentator with Vince Van Patten, the original duo that stuck together through the WPT becoming a hit, changing channels, going public, and changing ownership. And when bwin.party, PartyPoker’s parent company, bought the WPT in 2009, Sexton was again affiliated with the company and soon became an ambassador for the site.

Mike Sexton, Chairman of @partypoker talks about his first WSOP now 32 years ago! It was a little different back then…@Mike_partypoker @WSOP pic.twitter.com/JPgk1afSN5

But in May 2017, Sexton made a huge decision to leave the WPT altogether and put his full energy into PartyPoker. He took on the official role of PartyPoker Chairman and serves a number of roles within the company. There is only one goal, however, and that is to see the company rise again to its place atop the world of online poker where it was before it left the US market in 2006 in the midst of the poker boom. He noted at the time, “I am really looking forward to working with people that love the game like I do. We are not aiming for second place.”

Since then, the roster of pros under Sexton’s leadership has grown immensely.

The 2018 signings show the wide range of talent PartyPoker seeks for its roster. On January 8, Joni Jouhkimainen of Finland joined the team. His name may not be familiar to American players, but he has been gaining popularity in Europe, and his skills bring value to the team. And just this week, Isaac Haxton joined the group. He has long been known as a skilled player and permanent fixture in high-stakes games, but he was also known for his sponsorship with PokerStars that ended and resulted in a public feud over the direction of the company.

Join us in welcoming @ikepoker to the #partypoker team. Click the link to head to the partypoker blog where you can learn more about Haxton and his incredible #poker achievements. https://t.co/3DzE7c5x2M pic.twitter.com/XBhgO18xF0

No one person seems to head up the 888Poker roster. The group works together as a cohesive team, no matter if they’re together at a live tournament series or chatting online via social media.

Kara Scott is the most visible team member, mostly because she is known for hosting poker television and internet shows, and she does host “The Poker Brief” online news show. She also serves as the interviewer at some live events, even interviewing fellow team members. However, she plays in the events as much as do the others.

2017 was a great year in #poker! Check out this recap snippet and then watch the entire episode with our very own @KaraOTR ​here >>>https://t.co/WpISfLR7OF pic.twitter.com/3l8dsLrlRw

Chris Moorman and Dominik Nitsche are the most accomplished pros on the team. Moorman is known more for topping the online tournament earnings charts and nearing $15 million in lifetime winnings on the internet alone. His live wins show more than $5.3 million. And Nitsche is the opposite, as he shows more than $4.3 million online but nearly $11.5 million live. Together, they are forces at any poker table.

Bruno Kawauti and Nicolau Villa Lobos are two of the longest-lasting pros on the 888Poker roster, while Parker Talbot – better known online and on livestreams as TonkaaaaP – was invited to join in 2017. The group of women involved, in addition to Scott, are Natalie Hof and Sofia Lovgren, with Vivian Saliba as the most recent woman to join in late 2017.

The latest person to don the 888Poker patch is former WSOP Main Event champion Martin Jacobson. The announcement came just before the start of 2018.

Excited to announce that I have partnered with @888poker and will be joining their team of ambassadors. 2018 is going to be one hell of a poker year! #takingbackthegame pic.twitter.com/g3CYAPof1e

888Poker’s team seems carefully assembled to consider gender, skill levels, and regions around the world for a well-rounded team.