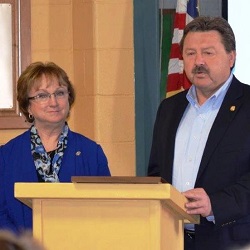 Several states gave online poker fans hope in 2018 that they would legalize the game. Nevada, Delaware, and New Jersey have been the only ones offering legal online poker for the last five years, and Pennsylvania is preparing to join the group. But no other states have passed pro-online gambling legislation since 2017. Michigan gave everyone hope in 2018 that it was determined to make it happen.

And Michigan did just that. The lawmakers behind the push – State Senator Mike Kowall and Representative Brandt Iden – spent countless hours encouraging support for their bill. And they passed it in December, only to find that Governor Rick Snyder was ready to veto it. And veto it he did.

It was a massive disappointment for poker fans, as well as the lawmakers who worked so hard to get the job done. Kowall, especially, took the loss to heart, as he worked on the legislation for several years, and online gaming was one of the bills he most wanted to pass on his way out the door.

Unsurprisingly, Kowall had a few things to say about the veto.

Former Michigan Senator @MikeKowall who led efforts to legalize internet poker/gaming in MI authored a great op-ed that lays out the case for the state legislature to pass a bill again and send to the new Gov (this time with NO VETO) https://t.co/zbHplaZkUR

Due to term limits, Kowall was unable to run to retain his seat in the Michigan Senate in 2018. He had served in that capacity since 2010, before which he had been a member of the Michigan House since 1998. His two decades in the state legislature provided plenty of perspective upon his departure, especially in light of the online gambling bill veto.

Kowall penned an op-ed for The Detroit News this month to put that perspective into words and encourage supporters of that bill to stay the course.

He began the piece by noting the economic benefits that Michigan would have reaped from the online gambling bill if not for the last-minute veto from the outgoing governor. But Kowall remained positive.

“While Snyder made a mistake, residents of the state of Michigan should not fret. The coalition of Democrats and Republicans we have forged in the state supportive of online gambling legislation has become too large to ignore, so the measure will get through the governmental process sooner rather than later. Instead of looking backward, we must look forward. That means using this time to inform our new governor, Gretchen Whitmer, of the many myths about online gambling out there so that this bipartisan effort doesn’t face another veto next year.”

Kowall went on to spotlight the benefits, starting with the complementary relationship that online gaming operators will have with their land-based casino partners. He noted the millions of dollars in new revenue possible for the state, especially for the city of Detroit, as evidenced by the success of the internet gaming industry in New Jersey.

He addressed the concerns of problem gambling organizations by noting that online gambling already exists in an unregulated environment, and legalization would allow it to be regulated and monitored by the state. Kowall also noted that this would allow for better safeguards against underage gambling.

“While both parties were disappointed by last week’s veto of the online gaming bill, in the coming year my colleagues that are still serving look forward to working with Whitmer to push it over the finish line once and for all.”

In the Hands of Iden

Over the past two years, Iden had become the champion of online poker and casino games, even more vocal about the topic than Kowall. He was happy to express his optimism, take the reins, and spread factual information about internet gaming to his colleagues.

There is little doubt that Iden will be introducing a bill to legalize and regulate online gambling, and it is likely to happen in the coming weeks. The bill that passed last year was comprehensive and approved by solid majorities in the House and Senate, so there is no reason to change the language of the bill.

The major objective will be to solidify the support of the new governor and some new members of the legislature in order to ensure a smooth bill passage in 2019. Iden is likely already working on it.

I think we can count on @BrandtIden to keep up the fight. Thank you! https://t.co/XdfG5U4wNb