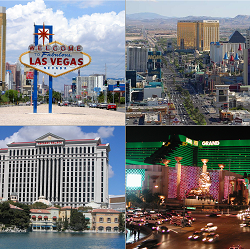 Only three months after MGM Resorts announced partnerships with GVC Holdings and Boyd Gaming, MGM appears to be considering a merger with Caesars Entertainment. The massive combination of gaming forces would consolidate many of America’s top gaming companies and create an immense conglomerate with the potential to become one of the largest – if not the largest – in the world. The value of the deal could exceed $50 billion.

Such a merger would also change the world of poker, both live and online. The World Series of Poker would be in play, as would the burgeoning online poker and gaming companies of both MGM and Caesars in the US market.

While there is no official deal on the table for MGM and Caesars at this time, and neither company has even confirmed that talks are underway, many signs point to the initial steps being taken to explore the possibilities and set it up for an early 2019 partnership.

At the end of July, MGM Resorts International announced separate partnerships with GVC Holdings and Boyd Gaming in the US gambling market.

The GVC deal was pegged as a joint venture to create a larger sports betting and online gaming platform in the United States, focusing on digital gaming verticals under the playMGM and partypoker brands and including online poker. It was intended to access the markets in 15 states.

As for MGM and Boyd, it would be a separate but equally important expansion of online and mobile gaming via sports betting, online poker, and online casino games verticals in the US market. This would solidify MGM’s presence in 15 states on top of the GVC agreement.

The possibility of a Caesars merger will be different for MGM, though the details are far from being released or even finalized.

On November 5, the New York Post revealed that MGM hired an investment bank (Morgan Stanley) and law firm (Weil, Gotshal & Manges) to begin researching the idea of a “giant tie-up.” The source said that no deal was on the table, but several signs pointed to a potential merger.

First, Caesars released its third quarter earnings and showed an operating profit increase of 176% to $232 million. The optimistic outlook and talk of “opportunities ahead” were signs that the company was confident in its value and potential.

Second, Caesars President and CEO Mark Frissora will be stepping down from his position on February 8. Having been in the role since 2015, much of his time with the company has been hailed as a success by members of the board, though stock prices have not reflected as much due to the severe drop during the bankruptcy proceedings. Even so, Chairman of the Board Jim Hunt credited Frissora with facilitating improved margins and profitability, as well as increased customer and employee satisfaction.

Third, the New York Post also reported that activist hedge funds have been pushing for a deal with MGM, as Caesars has been unable to boost stock prices to its former glory since the bankruptcy. MGM stocks have been down in 2018 as well. Those supporting the merger cited reduced overhead and marketing expenses as a reason for the push.

One of the most obvious concerns is the location of the annual summer World Series of Poker. Since leaving Binion’s in Downtown Las Vegas for the off-strip Rio in 2005, the WSOP was given the room to expand to take over the entire convention center space, but the location away from the main strip of casinos and hotels has frustrated some players in recent years.

There has long been talk of the WSOP moving to Caesars, but the lack of parking choices could create more frustrations. No other Caesars property in Las Vegas would likely be able to handle the throngs of people, either. But a merger with MGM would open up many new possibilities, some much more conducive to a massive undertaking like the World Series of Poker.

A merger between Caesars and MGM would also create more of a monopoly, as the combined set of properties would then run more than 170 of the live poker tables in Las Vegas, more than half of all available poker tables.

As for online poker, it remains a small part of the vast MGM and Caesars empire, but MGM has been seeking more inroads to the online gaming industry in the US market. As mentioned, the GVC and Boyd partnerships were established to solve some of that conundrum, but a merger with Caesars would offer MGM the only online poker operation in Nevada, as well as more opportunities in New Jersey and Pennsylvania.

In addition, the power of an MGM/Caesars brand could help to convince Nevada to open its internet gaming market beyond poker and embrace online slots and table games. The influence of the new force could also work to better lobby legislators in more states to legalize online poker and gaming, and it could possibly influence the American Gaming Association to formally support and advocate for online gaming.

The possibilities are numerous. There are also downsides to a gambling monopoly such as this potential merger would create, but poker has the potential to benefit.