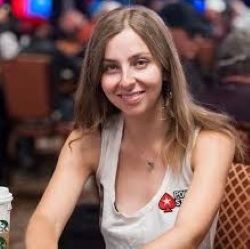 The exits continue from Team PokerStars Pro as the end of the year approaches. Contracts are set to expire, and players take stock of their poker lives as a new year approaches.

Just one week after two of the most recognizable faces in the PokerStars lineup announced their departure from the team, another one departed. Maria Konnikova reported on social media that she and PokerStars were “parting ways” after two years of sponsorship. This follows a similar message one week prior from Liv Boeree and Igor Kurganov.

The timing of Konnikova’s departure is interesting, however, due to the impending release of her long-awaited book about poker and her immersion in the poker world under the guidance of Erik Seidel.

Major announcements seem to happen via Twitter these days. Konnikova chose social media for her statement, a short and pointed message about parting ways with PokerStars but not with the world of poker in general.

It's been a fun two years, but it's time to say goodbye! Today, I'm parting ways with @pokerstars. But that doesn't mean I'm parting ways with poker! My new book will be out in 2020, and I'm looking forward to continuing to promote this beautiful game in the months to come. 1/2 pic.twitter.com/gJD8KJBlc8

Konnikova still seems to have a great deal of affection for the game and plans to stay involved, presumably playing when possible.

Her primary interactions with poker will be in the promotion of her upcoming book. The Biggest Bluff will be published in 2020 by Penguin Press.

Konnikova had only been with PokerStars barely two years, having signed on when she began working on her book and with Seidel as a student of the game. However, her departure came on the heels of Boeree and Kurganov leaving Team Pro. Boeree had been with the team for nine years, but neither of them played much anymore and Boeree wanted to use her science background in creating content.

It's been an amazing nine years but now it's time for @PokerStars and I to part ways. I want to say thanks to the incredible staff and my fellow team mates for all the wonderful memories, will miss you all! pic.twitter.com/RfRIbMwQaf

Before she took any interest in poker, Maria Konnikova was a published author and trained psychologist.

Konnikova is the acclaimed author of The Confidence Game and Mastermind: How to Think Like Sherlock Holmes, two books that were very well-received and translated into numerous languages. The Harvard and Columbia University graduate was also known for articles published in the Wall Street Journal, New York Times, and the Atlantic. Also, she wrote a regular column for the New Yorker.

The poker book idea developed for Konnikova as she became interested in the balance of skill and chance in life, which led her to research about the same balance in poker. By the time she looked into game theory, too, she was hooked.

Under the tutelage of Seidel, Konnikova began to study poker and play in tournaments. By the middle of 2017, she was playing regularly enough to have taken temporary leave from her writing for the New Yorker.

As she said in a 2017 interview, “We decided he was going to train me for a year from zero to wherever he could take me as a test of his poker philosophy. With a PhD in psychology, my approach is very psychological, and that is his approach as well.” She added that despite the mathematical nature of most current poker study, Seidel maintained his superiority in the game for 30 years throughout the changes.

Konnikova was and is the only student in Seidel’s poker career. And she wanted to know, “Can you actually – with just psychological insight and that thought process – train someone to become someone who can hold her own at the poker table?”

Some exciting news: my new book is now official! Spoiler alert: the champion is @Erik_Seidel—and he's *the* absolute greatest, not one of. pic.twitter.com/7okD1xlH8P

Learning from a Poker Legend

Erik Seidel began his relationship with poker at private games at the Mayfair Club in New York decades ago. He was a backgammon tournament player but began to study poker, and then he began making his mark in tournaments around the United States and then the world.

Over the years, Seidel accumulated eight World Series of Poker (WSOP) bracelets, a World Poker Tour (WPT) and a European Poker Tour (EPT) title, and many others.

To date, Seidel has earned more than $37 million in live poker tournaments alone, putting him fourth on the global all-time poker earner list.

Some exciting news: my new book is now official! Spoiler alert: the champion is @Erik_Seidel—and he's *the* absolute greatest, not one of. pic.twitter.com/7okD1xlH8P

As he began working with Konnikova, she began cashing in tournaments at the PokerStars Championship in Monte Carlo, the WSOP in Las Vegas, and in events like the PokerStars Festival in Dublin. By that time at the end of 2017, she also secured a sponsorship deal with PokerStars as a poker ambassador.

In January 2018, Konnikova won her first tournament, the PCA National event in the Bahamas at the PokerStars Caribbean Adventure for $84,600. She continued to play and cash in tournaments, racking up nearly $300K by the end of the 2019 summer.

Konnikova called the game an “interesting intellectual challenge,” something so “strategically and psychologically fascinating.” And that was at the beginning of her journey in 2017 when she first announced the book.

Poker tournaments seemed to stop for Konnikova in the late summer of this year, as she returned to writing her column for the New Yorker. She also organized and delivered more workshops using poker as a teaching tool.

And she appears to have completed the book. The Biggest Bluff was submitted in mid-October.

Is that my completed manuscript? Why yes. Yes it is. pic.twitter.com/n5jhOj6axA

There is not yet a publication date. Konnikova’s website merely states that the book is due out in 2020.