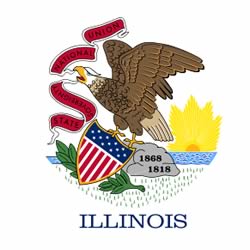 Illinois was one of only a few states that held open the possibility of legalizing online poker and other casino games in latter part of 2018. The consideration has been part of a larger gambling expansion bill that was and remains on the table for lawmakers this year.

While online gaming has been a part of gambling discussions in Illinois for several years, it gained momentum in early 2018 when the US Supreme Court ruled in favor of New Jersey in the now-famous sports betting case that overturned PASPA. States were excited to obtain the right to legalize sports betting, and many took it right into the legislative process. Illinois did it, while also including a number of other forms of gambling for which advocates had lobbied.

The trajectory of the gaming bill ultimately hinged on a mid-October hearing, the second in several months. The hearings ultimately focused primarily on sports betting, leaving other issues on the sidelines, and ended with the intention to pursue SB.0007… in early 2019.

When the first of the two hearings happened in Chicago, the purpose was to discuss various aspects of SB.0007, a bipartisan bill sponsored by members of both houses of the state legislature. The bill had been carried over from January 2017 and amended numerous times, ultimately becoming a comprehensive gambling expansion bill that included everything from online poker and casino games to sports betting.

The August hearing was overseen by Illinois State Representative Robert Rita, an advocate for online gaming and one of the bill’s sponsors. He coordinated the hearing, which focused primarily on video gaming terminal expansion and the possibility of publicly-owned casinos in several cities.

That left online poker supporters hoping for a more comprehensive discussion at the October 22 hearing in Springfield.

Per several reports, it seems as if the hearing this week in Springfield focused heavily on sports betting. And it appears that there is so much support for sports betting that State Representative Lou Lang is planning to draft a bill solely for sports betting to be introduced during the new General Assembly.

The State Journal-Register reported that Lang “anticipates lawmakers will take up the idea in earnest” in January, during the new session. That focused bill will address locations for sports betting, tax rates, and possible wagering by phone, though it is unclear if internet-based betting will be included. “In the end,” he said, “I’ll have to take all the ideas, do the best negotiation I can, pull it all together and try to put a bill on the floor I think I can pass.”

Lang has more research to do before drafting the new bill, as he wasn’t even sure of the potential revenue for his state, saying he had heard it could be anywhere from $50 million to $350 million annually.

Will Online Poker be Left in the Dust?

If Illinois lawmakers are left to their own devices, sports betting may be pushed forward quickly at the beginning of the new year, leaving all other forms of gambling expansion behind. This means that online poker and casino games, as well as changes to the land-based casino industry, video gaming terminal business, and horse racing industry will be left with a bill of leftovers. And those issues will have to all be separated or somehow combined into a new piece of legislation that will be debated and amended throughout 2019.

Some quotes from the State Journal-Register piece indicate that Lang understands more than he thinks about the entire online gaming industry. In response to those expressing concerns about a proliferation of gambling addiction, Lang responded:

“That gambling addiction is going to happen whether we legalize sports betting or not. People who want to gamble do gamble, will gamble and are gambling. Billions and billions of dollars are wagered illegally every year. We’re not going to be able to stop them from doing it, so we should regulate it and tax it.”

This is where the Poker Alliance will have to step in and work its magic. President Mark Brenner has been working the sports betting hearing circuit to insert the online poker message into discussions around the country about sports betting. And it seems like an ideal time for Brenner to speak with Lang to urge the consideration of online poker and gaming to go with sports betting legislation. People in his state are doing it in large numbers, so they should be able do it safely amidst a framework that allows Illinois to protect them while regulating and taxing the activity.

As it stands, it seems as if SB.0007 may be dissolved or left without sports betting, which was its main driver. Lang could champion a new bill that combines online gaming with sports betting, but Rita could also move on his online gaming proposals separately. As they make their decisions in the coming months leading up to the new General Assembly in January, poker fans should hope that the Poker Alliance is involved in any discussions.