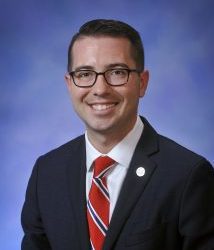 Michigan State Representative Brandt Iden is not giving up. He plans to push his online poker and casino games bill in the legislature. And he’s doing the same with his separate sports betting bill.

On October 29, Iden introduced an amended bill for internet gaming legalization. Though he hasn’t come to any agreement with Governor Gretchen Whitmer, he made concessions in the bill to show a willingness to compromise. He hopes that she will do the same.

Iden started the year by introducing the 2019 Lawful Internet Gaming Act – also known as HB.4311 – on March 7. He did so in conjunction with State Senator Curtis Hertel Jr., who introduced SB.0186 as a companion bill.

There was some quick progress for Iden’s bill, which passed through the House Regulatory Reforms Committee with a 13-to-1 vote. It was then referred to the Ways and Means Committee.

It was during Ways and Means hearings that the problem became clear.

The Michigan Department of Treasury issued an analysis of internet gaming legalization, one that Whitmer believed. It asserted that online poker and casino games would take revenue that would have otherwise gone to the School Aid Fund via the lottery and land-based gambling facilities.

Iden tried to submit New Jersey’s five-years-plus history of internet gaming as an example of how the games complement land-based properties, but Whitmer didn’t buy it.

Iden called those numbers “non-starters” and not “meaningful.”

As first reported by @OPRupdate, Michigan online poker and igaming bills are stuck as @BrandtIden finds no willingness from Governor Whitmer to talk or negotiate. https://t.co/kkXzzVvmLr pic.twitter.com/sR3r4uQwv3

Much of the 33-page bill was the same as when it was originally introduced, but Iden did offer some changes. The new numbers were:

The day before Iden revealed his compromise bill, he spoke to the Detroit News about the process of negotiating with Whitmer. Essentially, he called them unsuccessful.

Iden stated that he reached out to Whitmer’s office several times to negotiate, but he was always told that everyone was too busy to discuss it.

“It’s too bad that the folks have been too busy to engage,” Iden said, “but we have to move forward with the minimal amount of session days left.

Whitmer spokesperson Tiffany Brown said, “The administration has taken every meeting we’ve been invited to regarding this legislation, and we have continued to work closely with the bill sponsor, tribal leadership and stakeholders to attempt to address our concerns.”

As Iden noted, there are few session days remaining in 2019. The House only shows official session days as follows:

The Senate shows the same but with two additional days on its calendar:

It can be done. Last year, Michigan’s online poker and casino games bill passed through the legislature on December 21.

Sure, one week later, outgoing Governor Rick Snyder vetoed it on the last Friday night of the year. But the point is that a bill can pass in the remaining days of the legislative calendar.