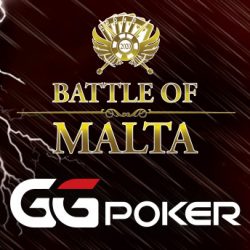 As online poker grabs more and more players from around the world, GGPoker of GGNetwork is celebrating quite an accomplishment. It entered Guinness World Records™ with the totals from the World Series of Poker Main Event nearly two months ago.

Remember the interesting decision to take the WSOP online with GGPoker during the coronavirus pandemic? That turned out to be a positive decision for both sites and many players. And in the end, the prize pool for that WSOP Main Event is now in the record books…officially.

That announcement came just days before GGPoker announced the full schedule for the Battle of Malta 2020. Again, thanks to the pandemic, another live tournament series bit the dust, but it decided – like so many before it – to take its action online.

The series is now set for November 1-22 with more than $30 million in guarantees.

History Books and a Guinness Book

It is easy to say that the WSOP 2020 will make the history books. It was the first time the official World Series of Poker took its summer series online. It happened during a pandemic. And it split the series between the US market and the rest of the world.

The 54 tournaments hosted by GGPoker and Natural8 for the international crowd delivered staggering numbers.

But one tournament outshone all the others, as it often does. It was the WSOP Main Event, the first ever online. That meant its parameters were different. The buy-in was $5K instead of $10K, it offered several reentries, and there were 23 starting flights. And there was a guarantee on the prize pool…of $25 million, no less.

Everyone involved knew at the time that it was the largest prize pool for any online poker tournament in history, but it needed to become official.

Enter the Guinness World Records™. An official adjudicator for Guinness checked it out, verified it, and put it in the books.

This pandemic just won’t let poker events take place in person yet. In fact, a second wave of positive coronavirus cases is sweeping across most continents now. It’s gonna be awhile.

The folks at the Battle of Malta sadly informed the poker community that Portomaso Casino would not host the Malta Poker Festival in 2020. It wasn’t safe in the past few months to host a large live poker tournament, and health experts were certain the winter months would only make the situation worse.

But just days after the cancellation announcement, organizers noted that they would take the series online with GGPoker.

Now, the details are set, Casino Malta General Manager Slawomir Switalski said, “It is with a heavy heart that Casino Malta had to postpone the much-awaited Battle of Malta live event, but we’re elated to partner with such a prestigious brand as GGPoker. We look forward to seeing everyone in Malta in 2021 for a very special Battle of Malta.”

Today, GGPoker released details. The series will run November 1-22, and three weeks of tournaments will offer $30 million in guaranteed prize pool. There will be 15 ring-awarding events, alongside numerous associated side events throughout the three weeks.

The highlight, of course, will be the Battle of Malta Main Event, which will require a traditional $550 buy-in and guarantee $3 million. Starting flights will begin on November 8 and run through the start of Day 2 on November 22.

As mentioned, there will be numerous side events running daily throughout the 2020 Battle of Malta. GGPoker has not yet listed the full schedule of side events, only those for November 1. That alone, though, shows the diversity of options available, with 22 events in addition to the three Battle of Malta ring events and buy-ins ranging from $5 to $3,150.

The 15 events of the Battle of Malta are:

Of course, players can start winning their seats now via satellites on GGPoker, which start as low as $0.55.

GGPoker will also host a Player of the Series leaderboard. Players will receive points for every official series event they play, and the final results will put the top 50 players in the money. In fact, there will be €50K distributed among them as follows:

The full schedule, all details, and information about media coverage are on the GGPoker website.

With @BattleOfMalta coming up on @GGPokerOfficial, we're getting into it with some #BOM #throwback action