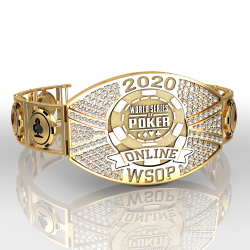 It happened so fast. The WSOP Main Event played down from 1,171 players to 38 in one day, and then from 38 to one winner in fewer than seven hours.

It was not on television, there were no interviews or bios of the finalists, and the players had no faces during the action. But poker fans tuned in online to livestreams and updates to see the historic World Series of Poker find its Main Event champion in an era unlike any other.

Stoyan Madanzhiev won the tournament with the largest-ever prize pool for an online poker tournament.

The only thing that most poker fans know about the WSOP 2020 Online Main Event champion is his name and his initial self-videoed reaction.

And we know how it happened because of PokerNews’ live reporting.

Players wanting to participate in this year’s unique WSOP Main Event had many ways to do so. They varied greatly from any time in the World Series of Poker’s history in many ways.

Traditionally, players had satellite opportunities to win Main Event seats, some online but most at the Rio in Las Vegas. This year, players had weeks of chances to qualify to play the Main Event at a small fraction of the buy-in.

Traditionally, players had one, two, or three starting days to get into the Main Event. This year, there were 23 starting flights.

Traditionally, players had one chance to make it into the money. This year, they had the ability to reenter two additional times if they busted during their starting flights.

Traditionally, players have no guarantees on the prize pool. This year, the hosts guaranteed that it would be at least $25 million.

Traditionally, players submit to a grueling live day-after-day schedule of play, submitting to interviews and answering reporters’ questions along the way. This year, they played from home with relative anonymity.

Traditionally, players making the WSOP Main Event final table have a chance to celebrate the accomplishment and plan their final table strategies. This year, the blurringly fast action allowed for no preparations or celebrations of the moments leading to their final standings.

But in a year when a pandemic changed the ways of the world in many ways, the World Series of Poker and GGNetwork made a WSOP Main Event happen in the most non-traditional of ways.

From 23 Starting Flights to 38 Players

Those 23 starting flights showed a range of participation. The lowest was Day 1D with just 68 players, and the most well-attended was Day 1W with 858 players in the last-minute turbo flight. (We provided more details of each flight in this piece.)

While there may have been some nervousness about the Main Event meeting its $25 million prize pool guarantee, they rested easy when they tallied the final numbers.

Poker history, that is.

Registration is CLOSED in the @WSOP $5,000 Main Event!

When the 1,171 players gathered together on Sunday, August 30 to play their version of a Day 2, Kahle Burns was the initial chip leader from the starting flights.

It didn’t take long to play down to and burst the money bubble. That left 728 players guaranteed at least $11,834 for their efforts. Hundreds of players busted from the event, including former chip leader Burns. Play stopped with 38 players remaining and Bryan Piccioli with the most chips. Michael Kane was second, and Stovan Madanzhiev was third.

Those 38 players logged back on to their GGPoker accounts on Saturday, September 5.

The three previous WSOP bracelet winners were among the first to exit: Arkadiy Tsinis in 37th place, Jonas Lauck in 34th, and Michael Lech in 31st. And as play moved along quickly, former chip leader Bryan Piccioli busted in 23rd place for $79,625.

When Piccioli began his fall, Madanzhiev took over. He lost some ground when several players doubled through him, falling to seventh place on the leaderboard with 16 players remaining. He quickly climbed again, though, eliminating Craig Timmis in 13th, Samuel Vousden in 12th, and Mariano Martiradonna in tenth. Tyler Rueger had stepped up, meanwhile, and eliminated Benjamin Rolle in 11th.

The final table then began with Rueger holding a slight lead over Madanzhiev, and each of them nearly two-to-one over the others.

It's final table time at the @WSOP Main Event with Tyler Rueger leading the final 9 players.

Wenling Gao took charge quickly to eliminate Samuel Tayler in ninth place and she worked herself into the lead. She and Madanzhiev then traded that lead.

In a battle of the Tylers, Tyler Rueger ousted Tyler Cornell in eighth place. Gao came back in to bust Stefan Shillhabel in seventh.

Three-handed play began with Madanzhiev holding a significant lead over Gao and Rueger. When Rueger took A-Q into battle, Gao quickly called with pocket kings, which held up to send Rueger out in third.

Congratulations to Wenling Gao, the Last Woman Standing in the 2020 #WSOPOnline Main Event.

Known as 高兴 (Happy) in the Asian circuit, she finishes 2nd for over $2,700,000, moving her into 1st on the @WSOP all-time money list for female players.#womeninpoker #bracelethunting pic.twitter.com/nD5BUbXd0t

The final table payouts were as follows:

What a final hand in the WSOP Main Event!

Stoyan Madanzhiev of Bulgaria has Wenling Gao drawing dead on the turn when the chips go in.https://t.co/PT1KbpFuvU

Madanzhiev pockets over $3,9M and the WSOP ME bracelet!