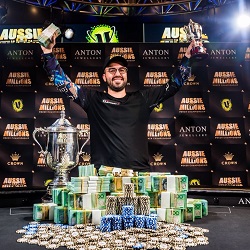 When the Aussie Millions began in January 2019, there was an entire schedule of tournaments on tap to run from January 15 to February 4. Players had the opportunity to begin with events like the $1,150 NLHE event with a $1 million guarantee, a $2,500 HORSE, a $1,150 NLHE Shot Clock Shootout, or a $1,150 PLO tournament. There were 27 events in all.

And while the high-roller action got much attention because of the money and popular players involved, the primary attraction was – as always – the AU$10,600 buy-in 2019 Aussie Millions Main Event. It kicked off on January 27 with three starting days and ended one week later with its champion.

Bryn Kenney, longtime poker pro, entered 2019 with more than $25.5 million in lifetime live tournament earnings. And while he cashed in several tournaments, it was the Main Event in which he shone brightest, taking down the coveted title and enough prize money to put him over the $26.6 million mark.

The first of three starting days brought in 165 players but reduced that number to 79 by the end of the night. Day 1B added another 268 entries to the list, though only 135 players survived that day. An additional 364 were added on the third and final starting day, but registration remained open into Day 2.

Day 2 began with more than 400 survivors of their starting days, and another 25 new entries were recorded at the last possible opportunity. That settled the following information and set a new record for the Aussie Millions Main Event prize pool.

Action on Day 3 reduced the field further and pushed up on the money bubble, at which point Maxi Lehmanski’s jacks failed to overcome the kings of his opponent. Players began busting, guaranteed at least AU$15,600 at the cashier cage.

As the night moved forward, some of the players who exited with cash included Minh Nguyen, Andrew Chen, Oliver Gill, Billy Argyros, Shane Moran, and Jesse Sylvia. Play stopped with 38 remaining, AU$31,200 as the payout level, and Mike Del Vecchio as the chip leader.

Day 4 played down to the final table, with Farid Jattin, Dominik Panka, Angel Guillen, Jack Salter, and Michael Addamo exiting along the way. The ultimate elimination of Robert Glasspool in eighth place for AU$180K ended play and set up the final table as follows:

A Lesson in Final Table Patience

As Hinrichsen soared over 10 million chips, Kenney doubled through Lee, who was subsequently eliminated in sixth place by Hinrichsen. As round after round played out, Kenney moved into the middle of the leaderboard as Wakeman lost ground. Taylor eventually ousted Wakeman in fifth place.

As the hours went by and more than 200 hands had been played, the final three finally decided to do an ICM chop with a few adjustments. That ended the tournament with Kenney taking the title and most prize money, Del Vecchio taking a slight second, and Hinrichsen taking third.