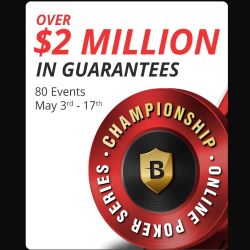 May is filled with online poker tournaments. There is a series for players in many parts of the world – Canada, some parts of Europe, many Asian countries – with 595 events on GGPoker. And there is another large one on PartyPoker that begins today for the same players. There is also a series of Sunday-only tournaments with big guarantees but buy-ins start at $109, though it is open to most American players, not just those in Nevada, New Jersey, Delaware, and sometimes Pennsylvania.

BetOnline offers more realistic buy-ins to players in America who have few choices for online poker.

Last month, BetOnline ran its Dollar Insanity tournament with tons of starting flights and only a $1 buy-in. That event culminated in a finale last weekend with a $25K guarantee.

And starting today, BetOnline kicks off its 80-tournament series for May called the Online Poker Series Championship.

Grab your coffee, and head to the tables

It starts today. The BetOnline Poker Series Championship runs May 3-17 with a total of $2 million in prize pool guarantees.

Buy-ins for the tournaments begin at just $1.10. There will be something for everyone, as buy-ins soar to $530, but players of all bankrolls will find something appealing.

The 80-tournament schedule begins today (May 3) with these offerings:

Next Sunday, these tournaments will offer another variety of buy-ins and an even bigger Main Event:

And finally, on the last Sunday, which will be May 17, the biggest Main Event highlights the offerings:

The full schedule is available on the BetOnline event page. Satellites are available for all events.

New players can get a 100% welcome bonus on deposits up to $2,500 through this special link.