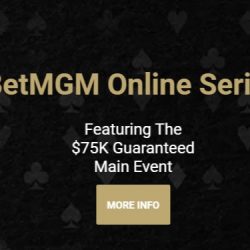 PokerStars had been the first to launch online poker for Michiganders in late January, which gave the site a significant head-start with players. But that hasn’t stopped BetMGM from tapping into the market and slowly trying to win over some of the players.

The first day of real-money poker at BetMGM online was Monday, March 22.

Players didn’t flock to BetMGM online poker as the operator had hoped. The reaction to PokerStars was different in that it was the first to market and it was a familiar name. Everyone knew the long track record of PokerStars in the world of poker.

BetMGM doesn’t have any of that recognition. Many players don’t know that BetMGM uses PartyPoker software and will eventually connect with other PartyPoker-affiliated sites in New Jersey. Had they known the connection, they may have been quicker to trust the new kid in the neighborhood.

The lack of players rushing to BetMGM MI led to tournament after tournament missing their guarantees. F5 Poker noted that the first day of action saw:

That didn’t stop the new kid on the block from buckling down and pushing forward.

The first series of tournaments to run on BetMGM will be the one with the most obvious name: BetMGM Online Series. It is scheduled to begin on Sunday, April 18, and it will run through Sunday, April 25.

The 10-event series will guarantee exactly $300K in prize pools. The full schedule is as follows:

All of the events offer unlimited reentries.

There doesn’t seem to be a Main Event. (Event 10 could be it, per a note on the BetMGM MI schedule page, but no other reference to the tournament indicates Main Event.) However, there was a tournament on April 11 dubbed the BetMGM Grand Online Main Event with a $100K guarantee. That $109-buy-in affair brought in 1,130 entries to surpass the guarantee and award $113K in prize money.

BetMGM Poker Michigan has released the full schedule of its inaugural Online Series.

A total of ten tournaments are slated to commemorate the launch of BetMGM’s poker room in the Great Lake State.https://t.co/RwbADL7NWG