Beshear and Koenig Team Up to Push KY Gambling Bill 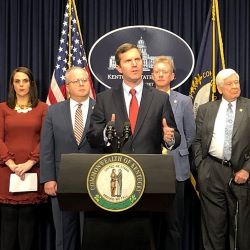 There aren’t many issues that garner bipartisan support in today’s American political environment. But there they were – a Democratic governor and Republican State Representative – holding a press conference in support of sports betting.

The press conference last week brought the unlikely pair together. Newly-elected Democratic Governor Andy Beshear and Kentucky Representative Adam Koenig took to the podium on February 6 to discuss the benefits of a pending bill that would expand gambling in Kentucky. It not only focuses on sports betting; it also includes fantasy contests and online poker.

Momentum is building for the bill to pass the House, but there is some doubt that it will pass the Kentucky Senate. If that happens, it won’t be for lack of a strong bipartisan effort.

Asked Kentucky Rep. Adam Koenig if any new hurdles have arisen re sports betting bill (that passed committee vote this AM).
"Nope," he replied. "Have a partner in the governor's office now."
Koenig is a Republican; Andy Beshear a Democrat. Betting makes strange bedfellows.

A Democrat and a Republican Walk into a Press Conference…

There is no punchline. It happened last week, when Beshear and Koenig took to the much-publicized press conference. They also brought friends, including leaders of the Kentucky Chamber of Commerce, Fayette County Education Association, and a pension advocacy group called the Kentucky Government Retirees.

All of them support HB.137, the Koenig-sponsored bill pre-filed in the House in December and officially introduced on January 7, 2020.

The Associated Press reported that the core message was that Kentucky needs the additional revenue. And the sooner that Kentucky offers sports betting the better, as Kentuckians are traveling to neighboring states in big numbers to take advantage of legal sports betting.

Beshear noted, “I’m tired of trailing other states. It’s time that we get into this game and we make sure that we are keeping these dollars at home.” He went on to say that expanding gambling options in Kentucky would be the right thing to do, not only for business and tourism but to support underfunded public pensions.

Koenig added, “Let’s give grown adults the opportunity to make their own decisions.”

"As a Ronald Reagan Republican I believe in less government, more freedom and personal responsibility. And those were all tenets of the president and I think pretty much everyone here agrees with that in this case" pic.twitter.com/nRy09hKTKK

He believes if Kentuckians want to bet on sports, they should have a safe, regulated way to do it. pic.twitter.com/P1t0LPez09

Gearing Up for a House Vote

At the press conference, Koenig revealed that he hasn’t delivered the bill from to the House floor because of ongoing conversations with other lawmakers. He wants to make sure that the majority of representatives are “comfortable” with it, though he feels there is already enough support to pass it.

HB.137 passed the House Licensing, Occupations, and Administrative Committee little more than one week from the day it was introduced. And that vote was unanimous.

In the past month, HB.137 has been posted to the Rules Committee and garnered continuing support. There are now 38 cosponsors, not including Koenig, signed on to the bill. There have also now been five amendments to the bill on a variety of provisions. For example:

–Clarify 5% of all wagering administration funds to problem gambling assistance

–Specify the age of 18 as minimum for placing wagers

The last amendment was filed on February 5, just last week. Pending any further changes necessary after conversations with other lawmakers, Koenig should soon be prepared to officially introduce the bill to the House.

Koenig repeats his assertion HB 137 could pass today, but has not been called for a vote yet b/c they want to send it to the Senate with as many votes as possible. “I support that strategy and fully understand it,” Beshear says.

As recently as January 31, the Louisville Courier-Journal noted that there was opposition in the Senate. Even though that information came from gambling opponent Family Foundation of Kentucky, there was some confirmation from members of the Senate.

The newspaper did receive some confirmation. Senate President Robert Stivers was somewhat “ambivalent” about the bill but also “remains dubious of its potential to generate significant revenue for the state.”

House Speaker David Osborne noted that his constituents, especially those in rural areas, were not so receptive to added gambling in Kentucky.

The ongoing conversations seem to have swayed some opinions. The aforementioned AP report noted that Senate Majority Floor Leader Damon Thayer said the bill now has enough support to pass. “The sports wagering bill is one of the few opportunities to not only have a bipartisan victory,” he said, “but also find some new funding for the budget needs that we have.”

If the tide is indeed turning and Senate passage looks probable, Koenig may be poised to put HB.137 on the House floor.

Time is ticking. The last day for new Senate bills is March 3, and the entire legislative session runs out at the end of March for normal business.

“The time to pass sports wagering is now.”- @GovAndyBeshear joins bill sponsor @repkoenig, @KyChamber CEO @AshliWatts, the @KEA, legislators from both sides of the aisle, and many more to support sports wagering #kyga20 pic.twitter.com/te7lvNQjmi