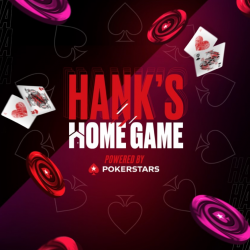 Actor Hank Azaria loves a good poker game. Before the coronavirus pandemic, when people could visit each other and socialize, he was a part of a regular home game.

Hank Azaria also loves to raise money for charity. He consistently shows up for charity events of all sorts, especially those involving poker.

In May 2020, Azaria led an all-star cast of celebrities who played an online poker tournament – Zoomed in from around the United States – for livestreams courtesy of PokerStars. It was called Stars CALL for Action. And in the end, the payouts were in the form of donations to their favorite charities. PokerStars gave $500K to those charities ($100K of which went to World Central Kitchen on behalf of winner and actor David Costabile) and another $500K to Care International.

PokerStars and Azaria decided to partner again, this time for a series of online tournaments dubbed Hank’s Home Game. It will benefit charities chosen by the celebrities.

And judging by the lineup and teaser of just the first episode, the table talk will be hilarious.

A special guest is in the booth…
👋 to @amyschumer #StarsRaising pic.twitter.com/pkOOqYImPU

PokerStars announced it this week, a series of online poker games on PokerStars to benefit a variety of charities. Actor and poker enthusiast Hank Azaria will host the games.

How can they do that, you ask? People in America can’t play on PokerStars for real money (except in New Jersey, Pennsylvania, and Michigan).

The kicker is that they’re playing for donations, which PokerStars will facilitate. There is no actual money on the tables. However, they are all playing for charities close to their respective hearts. There may also be some ego on the line, a bit of public image, some bragging rights amongst friends.

Azaria commented that the series is about great company and good conversation. “Whilst we hope our Home Game will keep everyone entertained during testing times, it has also been a chance to continue raising money for charity,” he said. “I am delighted that I have been able to work with PokerStars on this fun series, and I hope people enjoy it as much as we enjoyed playing each game.”

PokerStars’ Group Public Relations Associate Director Rebecca McAdam Willetts added that it will be a way for people to connect as the pandemic continues to relegate many people around the world to their homes. “Hank and many of his talented guests’ natural passion for poker has made bringing them together for good causes a real pleasure. We hope it provides much-needed entertainment for viewers at home.”

Celebs + Poker = 💥
Join @HankAzaria and friends in an A-list battle for the ages.

The first episode already played out online, complete with six players, all playing online and on camera from their homes. Azaria played with Don Cheadle, Jon Hamm, Michael Ian Black, Josh Charles, and Michael Cera for pieces of the $50K prize pool. All of it will go to charities they chose before the game began.

They will play on the PokerStars Home Games setup, complete with play-money chips. PokerStars will pay the charities in those players’ names.

The date for the second tournament is not yet available, but PokerStars did reveal that Amy Schumer and Jack Black are two of the players in games to be aired soon.

The PokerStars YouTube channel will air the episode at 6pm GMT on Sunday, January 31. For those of us in ‘Merica, that is 1pm ET, noon CT, and 10am PT.

Home Games for Everyone

Since many of us are still in quarantine or some stage of lockdown, it’s a good time to let everyone know that anyone – even Americans – can play a PokerStars Home Game.

PokerStars makes it easy to download the software and create a poker club of your own (or join someone else’s club). You can then invite people, schedule games, and manage the details. This includes everything from the style of your home game lobby to different poker variations and game structures.

Just a few months ago, PokerStars implemented some updates to the Home Games. Most of the changes were responses to player feedback, considering more than 300,000 new home games launched during the first few months of the pandemic.

The games are now available for mobile devices. Players can choose from the usual Hold’em and Omaha games, as well as specialty games like 6+ Hold’em and 5-Card or 6-Card Omaha. Players can also do progressive knockouts, too. And PokerStars added late registration options.

A step-by-step guide to getting an account, learning rules and strategy, and setting up a private poker club in PokerStars Home Games. https://t.co/mN88cBCgc5 pic.twitter.com/cP3659JYWQ