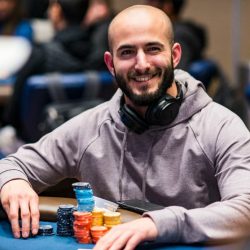 No one could have predicted that the World Poker Tour’s Season XVIII would last for nearly two years. It appears that a pandemic puts inordinate delays on hosting live poker tournaments. But that 18th season that began in July 2019 will finally wrap this month. The WPT Seminole Hard Rock Poker Showdown just determined its final table, and three final tables will play out at the PokerGO Studio at Aria in Las Vegas May 16-18.

With points tallied throughout the longest season, the WPT is now able to award its Player of the Year (or season) award to Brian Altman. Not only did he already clinch the title, he may add to his points when he plays at one more final table, one of the aforementioned tables for later this month.

Meanwhile, the WPT is putting together the first stops of Season XIX. The first one will be online later this month, and a stop at Choctaw is on the calendar for May.

Brian Altman was one of the star players in the first half of the World Poker Tour’s Season XVIII.

The young poker pro, now in his late 20s, was no stranger to poker tables before 2019. In fact, Altman cashed in major poker tournaments as far back as 2011 when he final tabled the Borgata Summer Poker Open Championship in Atlantic City.

His first major win happened to be at a WPT event, the WPT Lucky Hearts Poker Open in February 2015. He won it for $723,008. Later that year, he finished fourth at the WPT Montreal Main Event for $109,061. He finished that year with a win at the Foxwoods Mega Stack Challenge. He won other events on the East Coast going forward, like events at the Foxwoods Poker Classic and Ante Up Poker Tour at Mohegan Sun, while also taking down a WSOP Circuit ring in Montreal in 2016 when he won that Main Event for $132,979.

Altman had long been drawn to the World Poker Tour and has been playing in WPT events for nearly a decade. He cashed in numerous tournaments in festivals at WPT stops and in WPTDeepStacks events. That list is fairly extensive, so let’s just look at his WPT Main Event cashes and wins.

The highlighted events were the ones that contributed to his Season XVIII Player of the Year standings. And the last one on that list – WPT Borgata – only reads sixth place because the final table is one of those set to play in a few weeks. Since each player is guaranteed at least a sixth-place finish, his status is sixth place. That could improve on May 16.

Another point of interest in his Season XVIII journey was that his Lucky Hearts win in early 2020 was his second WPT Lucky Hearts win, making him the only player in the World Poker Tour’s history to win the same event twice.

So, on April 26, the WPT made it official and awarded Altman the POY title. For that feat, he won a WPT Passport worth $15K, a special Hublot WPT Player of the Year trophy, and a Hublot Big Bang Meca-10 Titanium 45mm watch valued at nearly $20K. The WPT will also cover accommodations (including food and beverage credits) and ground transportation for a majority of WPT Main Events in Season XIX.

There was a long list of accomplished players on the Player of the Year leaderboard, though only the first, second, and third spots receive prizes.

Jack Hardcastle of the UK finished in a fairly distant second place with 2,200 points. He had three cashes during the season, including a win at the WPT UK in Nottingham in September 2019 and fourth place at the WPT Venetian in March 2021. He also won the WPT Montreal Main Event online in January. He won a $7,500 WPT Passport.

Qing Liu of California garnered 2,000 points in total. He had finished sixth at the WPT Gardens Poker Championship final table and won the WPT Venetian Main Event in March of this year. The WPT awarded the $2,500 WPT Passport to him.

A New Post-Pandemic Season on Deck

The World Poker Tour has yet to formally announce its Season XIX schedule, but there are a few things on the main tour schedule already.

To continue the WPT’s presence online, it will again offer the WPT Online Series on partypoker. It will start on May 14 and run through June 2. There will be two Main Event tournaments to wrap the series, each offering one reentry per flight:

The first live series of the season will be the WPT Choctaw at Choctaw Casino in Durant, Oklahoma. The festival of tournaments will kick off on July 15 and run through July 27, though the complete schedule is not yet available. Main Event information is out, though:

This tournament will play to a winner with no delayed final table.